Visit our Bangalore destination hub for day by day itineraries, top things to do in Bangalore and more!

Dodda Basavana Gudi is situated in Bull Temple Road, Basavanagudi, area of South Bengaluru, part of the largest city of the Indian state of Karnataka. The Hindu temple is inside a park called Bugle Rock. The bull referred to is a sacred Hindu demi-god, known as Nandi; Nandi is a close devotee and attendant of Shiva. Dodda Basavana Gudi is said to be the biggest temple to Nandi in the world. Wikipedia

Bangalore city tour with a guide in private car and lunch Bangalore city tour is a day trip in Bangalore organized in a private vehicle to the best places to visit in Bangalore. The highlights include a visit to 240 acre Lalbagh Botanical Garden built by the legendary Hyder Ali in 1760 and the famous Bull temple at Basavanagudi with a 4.5x6.5 metre idol which has been carved out of a single rock. The experience also includes  Vidhan Soudha the architectural marvel, The International Society for Krishna Consciousness (ISKCON) temple and the Tudor style Bangalore Palace built by the Mysore Kings. This is an all-inclusive trip where we take care of transport,  lunch, activities and the services of a full-time tour guide.

This 3-hour curated walk lets you explore one of Bangalore's first extensions called as  Basavanagudi which is more than 120 years old.  Learn more about the history of Bangalore after the rule of it's founder, the king Kempe Gowda.  On this walk  you get to explore a few temples, some parks and also the local market. Included is a traditional South Indian breakfast/snack at an iconic restaurant in this neighborhood.

There are many cuisines that you can dine and enjoy in Bengaluru but the best way to experience the local life & food of the city is by interacting with locals and having interesting conversations over authentic and regional food. Meet Suma and Soumya, who invite you to their 80-year old ancestral home in Basavanagudi, Bengaluru, where you will get to experience and enjoy a hidden culinary treasure of India - Karunadu Oota. 'Karu' means black while 'Nadu' translates to region, and 'Oota' translates to meal. It is the regional cuisine of Karnataka where dishes are prepared using the grains and pulses that are grown in the black soil of the region. It is a cherished cuisine among Bangaloreans and the mother-in-law and daughter-in-law duo are preparing a lovely meal and also inviting you into their kitchen to try your hand at making these simple dishes, boasting of robust flavours. The whole experience can last about 2-4 hours. 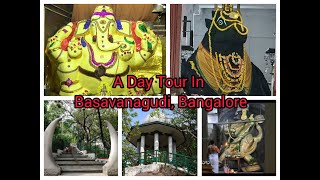 Things to do in Basavanagudi | A Day Tour In Bangalore 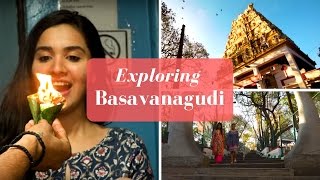 Basavangudi is a very well known locality in Bengaluru / Bangalore that houses the famous Bull Temple along with Doda ... 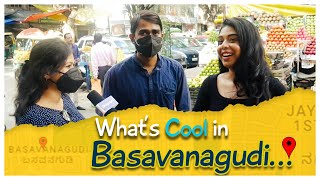 Here's is everything you should know about Basavanagudi by its very own people #bengaluru #kannada #karnataka ... 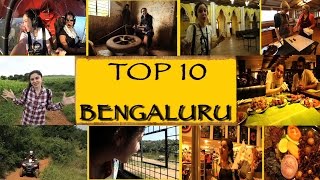 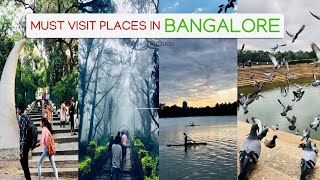 Bengaluru (also called Bangalore) is the capital of India's southern Karnataka state. The center of India's high-tech industry, the ... 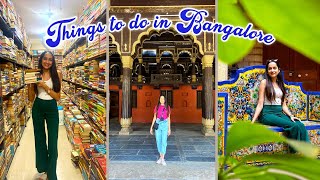 Bangalore Vlog | Things To Do In Bangalore

From Cubbon Park to Blossom Book Store, from watching sunsets to coffee tasting; here are my top picks for things to do in ... 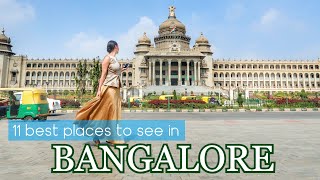 Places to visit in BANGALORE. Bangalore, the Silicon Valley City of India and the capital of the South Indian state Karnataka, is a ... 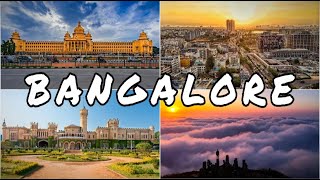 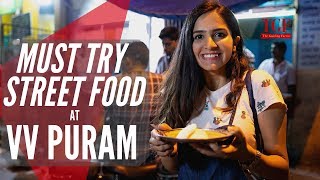 VV Puram - The famous food street at Bangalore, which is an Indian street food heaven - has got a diverse variety of cuisines to ... 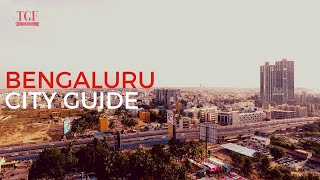 Bangalore is the most livable city in India! Wondering what makes Bengaluru the most dynamic city in the world? Have a look at ...

The Bull Temple is an iconic temple of Bangalore and lends its name to the area it is located in, Basavanagudi. ‘Basava’ in Kannada refers to the massive Nandi statue ...

Bangalore sightseeing : From A Local’s Perspective | Travel to Recovery
www.traveltorecovery.com

The Bull Temple road near Basavanagudi, the south of Bangalore has its own unique vibe. The temple is on the main road itself and is called as ‘Dodda Basavana Gudi’ ...

Exquisite Temples Around Bangalore That You Need To Visit Atleast Once In Your Life | Curly Tales
www.curlytales.com

Did you know, renowned author RK Narayan came up with the name of the fictitious city, Malgudi by combining the two of the oldest areas of Bangalore- Malleshwaram and Basavanagudi? ...

When it comes to housing the oldest, most authentic South Indian breakfast joints in India, Bangalore definitely tops the list. The 4 decades old Brahmin’s Coffee Bar in Basavanagudi serves ...

We spent time exploring the cafes, yoga classes, massages and jewellery making courses on Hippie Island and then rented a scooter to explore the other side of Hampi. Zipping through ...

10 Best Breakfast Places In Bangalore To Cure Your Hangover For 2020 | Curly Tales
www.curlytales.com

The metropolitan city of Bangalore might be known for its beautiful gardens or its thriving IT culture, but this Garden City has some of the oldest and most iconic breakfast ...

Located in Basavanagudi, Bull Temple is typical Dravidian style temple that is recognized for its mammoth bull statue. The statue is carved from a single boulder. The prominent landmark is ...

Famously known as the ‘Rock Garden of the city’, the Bugle Rock Park was built around a 3,000 million-year-old rock called Bugle Rock and is one of the finest green ...

Tourist Places in Bangalore| Places to Visit in Bangalore with family | Visiit.com
www.blog.visiit.com

The bull temple is arranged in Basavanagudi, worked in the Dravidian style of engineering. Kempe Gowda, the originator of Bangalore, got the bull sanctuary worked amid his opportunity. This sanctuary ...

Top 5 Things To Do In Hampi India - Jetset Bunny
www.jetsetbunny.com

… and never return! Only joking, you can of course get the boat straight back again if drum circles aren’t your thing. This is the quieter area of Hampi called ...

Places to Visit in Bangalore | Top Tourist Places to See Near Bangalore
www.travelomiles.com

The Nandhi Temple is situated in Bull Temple Road, Basavanagudi, area of South Bangalore. Nandi Temple is exclusively for the worship of the sacred bull in Hinduism, also known as ...

Top 10 Things to See and Do in Bengaluru, India - David's Been Here
www.davidsbeenhere.com

Another hotspot for street food in Bengaluru is VV Puram Food Street, which is located in the Basavanagudi locality. This food street is lined with at least twenty stalls selling ...

Hampi ATM: Sadly, there is no ATM in Hampi so you need to be very careful with your cash. Nearest ATM is in Kamlapur and one in Anegundi (the other ...

Vidyarthi Bhavan originally opened as a canteen for the young student community of Basavanagudi, Bengaluru in 1943 but became a cultural center of the neighborhood, attracting a regular clientele of ...

We stayed at the  “hippie” side of Hampi, Anegundi. It’s other side of the river from the main village Hampi where all the ruins are. Along the main street of ...

Well, if you are in and around Bangalore then do visit this groundnut fair. This two day fair also known as Kadalekai Parishe in Kannad, is held near the Dodda Ganesha ...

There is so much to see in Hampi and you’d need to spend at least a few days there to see everything. You’ll also find lots of small ruins scattered ...

Places to Visit in Hampi | Top Tourist Places to See Near Hampi
www.travelomiles.com

Vidyarthi Bhavan is located in Gandhi Bazaar of Basavanagudi which is in south Bangalore. The Rava Vada, the masala dosa and the tasty coffee drags the crowd there again and ...

Ten things to do in Bangalore, Karnataka ~ The Land of Wanderlust
www.thelandofwanderlust.com

Situated in Basavanagudi in the South of Bangalore. The main attraction of the park is the group of natural rock formations called the Peninsular Gneiss. These formations are assessed to ...

Things to do in Hampi - Life and Its Experiments
www.singhruby.com

Anegundi is a small village located at the northern side of the Tungabhadra River. To my much surprise this village is older than Hampi. It is popular for its linkage with ...