Sitges is a town about 35 kilometres southwest of Barcelona, in Spain, renowned worldwide for its Film Festival and Carnival. Located between the Garraf Massif and the sea, it is known for its beaches, nightspots, and historical sites. While the roots of Sitges' artistic reputation date back to the late 19th century, when painter Santiago Rusiñol took up residence there during the summer, the town became a centre for the 1960s counterculture in mainland Spain, in Francoist Spain, and became known as "Ibiza in miniature". Today, Sitges' economy is based on tourism and culture offering more than 4,500 hotel beds, half of them in four-star hotels. Wikipedia 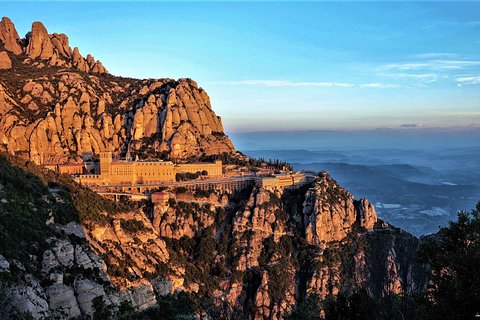 Embark on an amazing and comprehensive experience visiting two of the most beautiful and famous places near Barcelona. The magic mountain of Montserrat and the charming sea village of Sitges. In Montserrat, admire the wonderful holly Monastery, and then take a cable car to the top and enjoy an easy amazing walk. Discover Montserrat from a different perspective. In Sitges, take a break and taste the Mediterranean cuisine then enjoy a pleasant walk along the promenade and discover the colonial buildings and fantastic churches right next to the coastline. Small-group tour limited to 8 people to ensure more personalized service.

Tarragona and Sitges Tour with Small Group and Hotel Pick Up 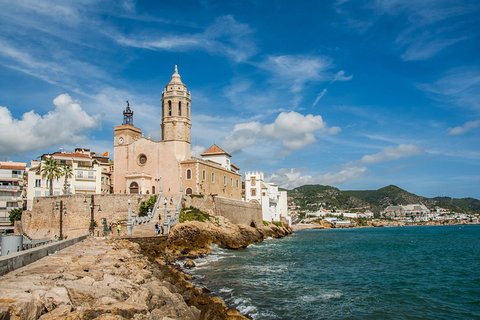 Travel back in time to the ancient capital of Hispania and enjoy the modern charm of Sitges. Live a day in the warmer shores of Catalonia. You will first travel to Tarragona, also known by its ancient name 'Tarraco', and then make your way to beautiful Sitges. Finish the day in San Sebastian, the best urban beach in Europe.

Cycling For Vino Bike Ride from Sitges, Barcelona with hotel pick up. 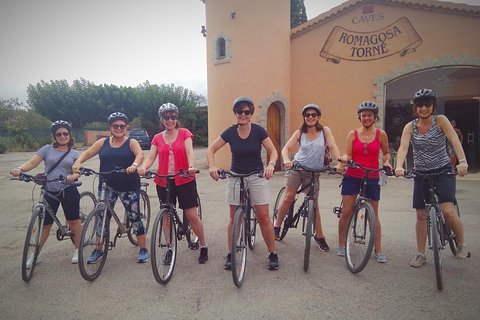 For those seeking a special and unique experience whilst visiting Sitges, there’s nothing better than a wine-bike tour in the Alt Penedés wine region. With Easy Cycling Sitges you will enjoy lovely scenery in your bike, finishing the day with a visit to a winery where you will learn and taste some of the local wines and cavas. Your tour group – limited to 8 guests – will be led by a local, knowledgeable Tour Guide – someone who’s excited to share his knowledge with you and enhance your education of the vine-to-bottle process. Within the first mile of the ride, you’ll relax as you realize that the pace really is designed for casual riders. You’ll pedal an average of 20 to 28 km. The emphasis is on enjoying the scenery, meeting new friends and discovering great wines and cavas along the way. Get in touch if your date is unavailable. We might be able to squeeze you in! 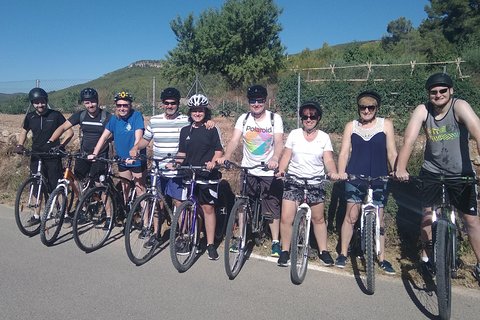 Suitable for all ages. You don't have to be an experienced cyclist. You will be transported uphill by mini bus and then ride downhill all the way. You can cycle as much or as little as you like. The mini bus will always be there for you. Explore Catalonian Mountains and vineyards while gliding downhill on a bicycle. Join us and take the 40 minutes journey to the beautiful area of Vilafranca del Penedes, all surrounded by wineries and lovely scenery. Hop back into the minivan for the journey back to Sitges, and still finish early enough to make other plans for your afternoon! Get in touch if your date is unavailable. We might be able to squeeze you in! 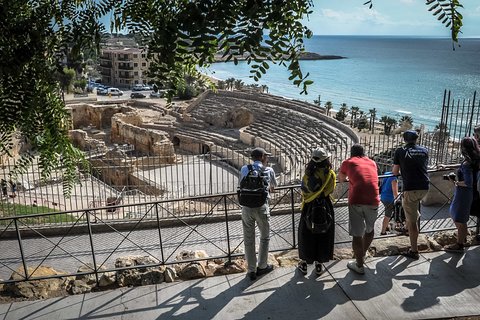 Combine history and the Mediterranean coast on a private day trip from Barcelona to Tarragona and Sitges. You'll travel in a comfortable, air-conditioned minivan to the Roman city of Tarragona, where you’ll see its amphitheater and Old Quarter. Then travel to coastal Sitges, where you can relax, take a walk and go for a swim. Led by a private guide, this tour provides personalized attention to you and your group.

Why keep your trip within the city limits of Barcelona when it’s so easy to travel to any of the great towns on the outskirts? The Renfe train is a ...

We’ll spend our final night in Sitges where our adventure comes to an end. If you’d like to stay longer then let us know, we’d be happy to extend your trip. ...

Additionally, just 35km southwest of Barcelona, is Spain’s premier gay beach resort, Sitges. The beautiful seaside town is a major destination for gay tourists, due to its wide range of ...

Travel around 30km south of Barcelona and you’ll find the tiny coastal town of Sitges. This quaint little area is a popular weekend destination for Barcelonians thanks to its many ...

A short journey by train will have you in Sitges, Barcelona’s go-to beach resort, in under an hour. Though the expansive sands and the semi to fully nude bodies that ...

This is a map specifically created by Sitges Tourist Information. It is a useful map as it is large and illustrated in colour. On one side it offers a map ...

If you would like to enjoy more of Costa Barcelona’s fabulous coast line then Vilanova i la Geltrú is the perfect location to begin a coastal walk to the near ...

Visit Montserrat - A Day Trip From Barcelona To Montserrat In Spain
www.imvoyager.com

Holiday planning is never easy. Deciding on the best day trip from Barcelona could be difficult, especially when you could choose to go to Sitges, Girona, and Tarragona and that’s ...

Just 35km southwest of Barcelona is Sitges, Spain’s gay beach resort. This beautiful seaside town has long been a major destination for gay tourists because of its large number of ...

Day 2 of our spontaneous and utterly chaotic road trip through Spain. After spending some time in Barcelona and recuperating from the nighttime madness there via a lovely beach day ...

This is a map specifically created by Sitges Tourist Information. It is a useful map as it is large and illustrated in colour. On one side it offers a map ...

A Guide to Spanish Pinchos (Pintxos) + Traditional RecipesWhere to See the Absolute Best Flamenco Shows in BarcelonaTake a Paella Cooking Class in Barcelona, SpainGet a Fish Pedicure in Sitges, ...

An Essential Guide to Barcelona – Hugh With A View
www.hughwithavieww.wordpress.com

Alternatively, I would definitely recommend a day trip out to the lively beach town of Sitges. Picturesque and less hectic than Barcelona, a walk through its old streets and a ...