Visit our Belize destination hub for day by day itineraries, top things to do in Belize and more!

Actun Tunichil Muknal , also known locally as ATM, is a cave in Belize, near San Ignacio, Cayo District, notable as a Maya archaeological site that includes skeletons, ceramics, and stoneware. There are several areas with skeletal remains in the main chamber. The best known is "The Crystal Maiden", the skeleton of an adolescent , possibly a sacrifice victim, whose bones have been calcified to a sparkling, crystallized appearance. The ceramics at the site are significant partly because they are marked with "kill holes", which indicate that they were used for ceremonial purposes. Wikipedia 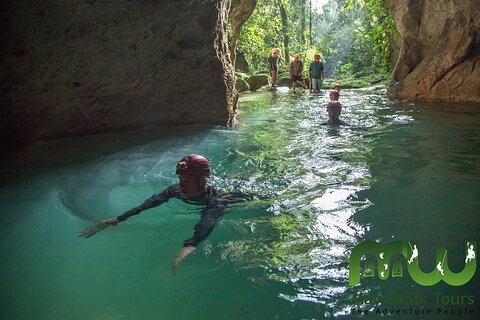 Actun Tunichil Muknal is a mysterious and beautiful portal to the ancient Maya and their traditions, ceremonies and spirituality. This cave system served as a ceremonial site where the Maya performed sacrifices and other ceremonies as they dealt with extreme and harsh conditions in times of drought. Explore this lush area surrounded by beautiful jungles, and the cave entrance is traversed by swimming across a crystal clear spring fed pool. Spend 3 hours in the cave after hiking in through the rain forest. Here you will see stunning artifacts, altars and the crystallized skeletons of the sacrificed girl, The Crystal Maiden. 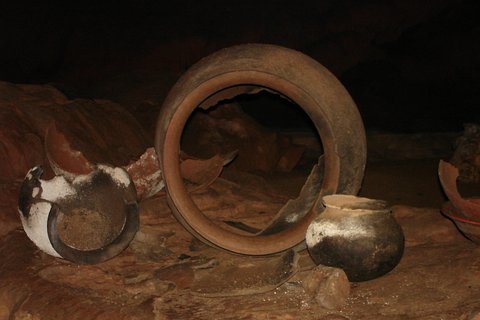 Explore the hidden chambers and crystalline waters of the Mayan underworld at Actun Tunichil Muknal (ATM), featured in National Geographic! Swim into the mysterious cave, which the ancient Mayas considered to be a portal to the underworld, known as Xibalba. This day trip from San Ignacio includes a 1.5-hour round-trip hike in Tapir Nature Reserve and lunch at the cave entrance. Climb, crawl, swim and play in the water passage as you enter the caverns, and delight in the refreshing waters of the Roaring River before and after your spelunking adventure. 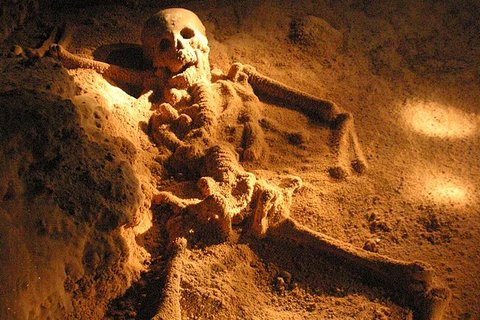 Taking a journey into the Mayan underworld at Actun Tunichil Muknal, or the “Cave of the Stone Sepulchre”, will be one of the most enlightening, epic, and unique experiences of your life! Recently deemed the #1 Sacred Cave destination in the world by National Geographic, the ATM cave is not only beautiful geologically, with its crystalline stalactites and stalagmites, but also historically, as is a natural museum of ancient Mayan artifacts, as well as a sacred burial place. This is the final resting place of the “Crystal Maiden”, an ancient Mayan ceremonial victim. 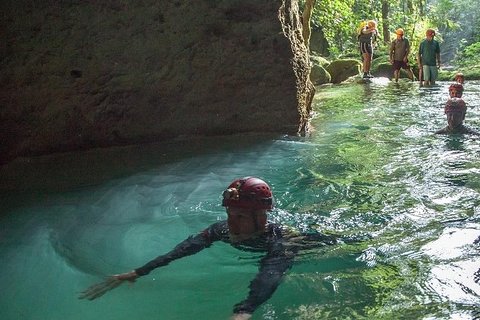 Actun Tunichil Muknal (ATM) is one of the most popular and impressive Maya ceremonial caves ever found. ATM was in use during the early classic period, which dates to around 300-600AD. The caving part of the tour, takes you through a subterranean river, over (and under) more than a few rocks and into the main chamber. The ATM Cave is a wet cave – you swim into the mouth and then wade through ankle to chest high water before climbing to a intricate passageways of dry chambers which lead to the cathedral-like main hall, a towering chamber 350 metres in length and 50mteres wide and filled with artefacts and sacrificial remains. After this another climb takes you to the stone chamber where the Crystal Maiden lies, this is the skeleton of a teenage girl who was sacrificed and left in the cave. Over thousands of years her remains have been covered by a layer of diamond like limestone. The Mayas sacrificed humans in the hopes of appeasing the gods and bringing fertility to the land. 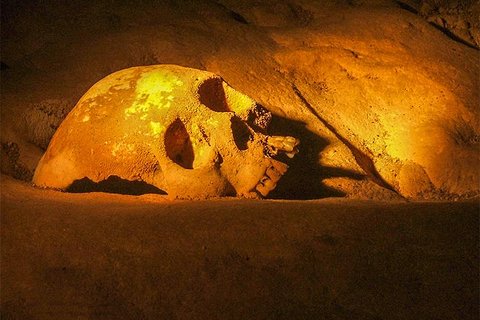 Actun Tunichil Muknal is one of Belize most sought after Adventure in our country. The tour is not just an adventure but one of the most interactive Maya history Cave Adventure available.

7 of Belize’s Most Impressive Attractions To Visit in 2017
www.belize-travel-blog.chaacreek.com

Actun Tunichil Muknal is one of the most impressive and artefact-rich Maya ceremonial caves ever found, containing rare bloodletting altars used in sacrifices by Maya royalty and over 1400 catalogued ...

We saw lots of ritual remains during our trip inside the Actun Tunichil Muknal (ATM) Cave but the artifacts and ritual sites on this trip rivaled what we saw in ...

5 Spooky Activities to do in Belize for Halloween
www.belize-travel-blog.chaacreek.com

If you’re seeking a truly chilling adventure – pun intended – the ATM Cave near San Ignacio Town is unmissable. The Actun Tunichil Muknal Cave is one shrouded in so ...

Top 10 Things to Do in Belize 2021 – Belize Adventure
www.belizeadventure.ca

Of the many caves worth exploring in Belize, Actun Tunichil Muknal (ATM) provides the most amazing experience. This guided tour involves trekking through the jungle and rivers before arriving at ...

Cave Tubing Belize: What You Need To Know (2020 Update)
www.belize-travel-blog.chaacreek.com

Universally shortened to ATM cave, this is probably the most famous of the bunch. Apart from most famous (to which there is still debate) it is certainly the most physically ...

Abandoned and forgotten over 1,000 years ago, the Actun Tunichil Muknal (ATM) Cave is like a time capsule of ancient Maya life. The cave was once used by Maya priests to ...

Top Things to Do in Belize in a Week - Thirdeyemom
www.thirdeyemom.com

Belize’s unique geology has blessed her with many intricate caves especially in Western Belize where the conditions for producing caves is ideal. In the eyes of the Mayas, caves were ...

Book a tour with your hotel to visit Actun Tunichil Muknal, also known as the ATM caves and one of the top sites in Belize. Not for the faint of ...

16 Amazing Things to Do in Belize - An Insiders Guide | The Planet D
www.theplanetd.com

Taking a day trip from San Ignacio to Actun Tunichil Muknal (otherwise known as ATM Cave) is hands down one of the most popular inland activities and best things to do in ...

Why the ATM Cave in Belize is a Must-Do – MY Travel BF
www.mytravelbf.com

As we said, the cave itself is beautiful too. Actun Tunichil Muknal translates to “Cave of the Crystal Sepulcher,” and there are crystal and crystalline formations all over the cave. ...

Top 10 Best Things To Do in Belize | The Common Traveler
www.thecommontraveler.net

Feel like having an Indiana Jones adventure? Add visiting the Actun Tunichil Muknal (ATM) Cave to your itinerary. Located inland near the small town of San Ignacio, getting there is ...

Things to do in Belize: Top Attractions & Activities (2021 Update)
www.belize-travel-blog.chaacreek.com

Barton Creek cave heavily contrasts the famous Aktun Tunichil Muknal, but should be held in as high regard in its own right. The cave entrance is rift-like, a wormhole into a ...

10 Things to Do When You Visit Belize - Wander With Wonder
www.wanderwithwonder.com

If you’d rather hike into a cave, book a trip to Actun Tunichil Muknal, a Mayan burial site featuring four skeletons and artifacts. The cave adventure requires some swimming, climbing, ...

Things to do in Belize: Top Attractions & Activities (2022 Update)
www.belize-travel-blog.chaacreek.com

Barton Creek cave heavily contrasts the famous Aktun Tunichil Muknal, but should be held in as high regard in its own right. The cave entrance is rift-like, a wormhole into a ...

6 Awesome things to do in San Ignacio, Belize
www.parenthoodandpassports.com

For adults and those traveling with older children, San Ignacio is also a great place to stay if you plan to visit the Actun Tunichil Muknal (ATM) cave, one of ...

The best things to see and do in Belize besides beaches
www.matadornetwork.com

The most famous cave system in Belize is the Actun Tunichil Muknal or “ATM” cave, located near San Ignacio. The bus ride from Belize City takes about 2.5 hours, with ...

21 Best Things to do in Belize - Sophie's Suitcase
www.sophiessuitcase.com

Spend a day out in the Actun Tunichil Muknal (ATM) Cave system. The cave was used by the Maya for sacrificial ceremonies and comprises of various rivers, sinkholes, and tunnel ...

Here you would gain access to around 2.4 kilometres of hike trails that take you through primary and even secondary tropical forests. You will want to also dip in the ...

Head west to San Ignacio Town if you’re looking for more of a jungle experience. It’s a great home base if you want to go caving in Actun Tunichil Muknal, ...

Pook’s Hill Lodge is centrally located in San Ignacio and easily accessible to both Belize City and Tikal in the opposite direction. It’s location is also just steps from the ...

Today we leave the cayes and head to the mainland- a new environment and culture. Upon arrival, we take a stunning journey into the depths of the Mayan cosmology and ...

18 Ideas for What to Do in Belize for a Week – MY Travel BF
www.mytravelbf.com

One of the absolute best things to do in San Ignacio, and all of Belize, is to visit the Actun Tunichil Muknal Cave, or as its more commonly known: the ...

9 Things You Need to Know Before Doing the ATM Cave in Belize – MY Travel BF
www.mytravelbf.com

There are absolutely no cameras allowed inside of the Actun Tunichil Muknal Cave. This is because a tourist once dropped their camera right into the skull of one of the ...