Visit our Cambodia destination hub for day by day itineraries, top things to do in Cambodia and more!

Koh Rong , is the second largest island of Cambodia. The word Rong might refer to an old term for cave or tunnel , although some islanders say Rong refers to a historical person's name. It can also refer to the old Khmer word for shelter, adding up to Shelter Island.Located in Koh Kong Province about 25 km off the coast in the Gulf of Thailand, the island has an area of approximately 78 km2 and 43 km of its entire coastline of 61 km are beaches. Four village communities exist on the island: Koh Tuich, Doeum D'keuw, Prek Svay and Sok San. Wikipedia 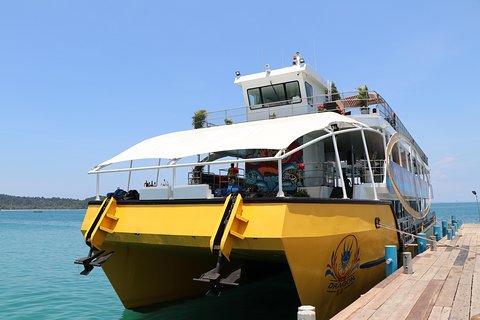 We invite you to a day offshore tour of the most populous tourist islands in Cambodia. From dawn to dusk, you will visit the three islands of Koh Rong, Koh Koun, Koh Rong Samloem. Kilometres of clean beaches and blue waters, swimming, snorkelling and water slides. On the way back, a foamy party and the incredible sunsets of Sihanoukville. Breakfast and lunch are included. It's all about having fun, relaxing and discovering new places. Happy Boat. Happy customers. Happy music. Happy day for all of you! 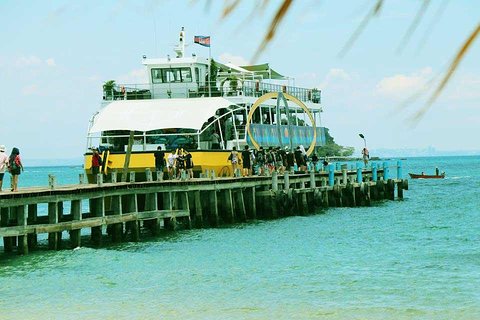 Take cruise tours to visit the world famous islands of Cambodia at the Sihanoukville for Koh Rong, Koh Thas and Koh Rong Samleom that all the beaches of the island were known as the most beautiful beaches in the world and in the cruise provide you also buffet lunch and breakfast with flow drinkPurified Water for the whole day and also offer free pick up from you hotel in Sihanoukville to pier of the cruise for departure.

Cruise along the Bassac River on this 5-hour cruise from Phnom Penh. Enjoy spectacular views of the Royal Palace and Koc Pich island; cruise around Koh Along Chen island; and tuck into a delicious 2-course lunch with wine on-board. A portion of the profits from this cruise helps support Ptea Clara, a local non-profit organisation. 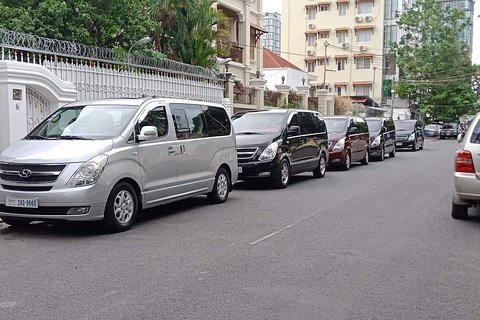 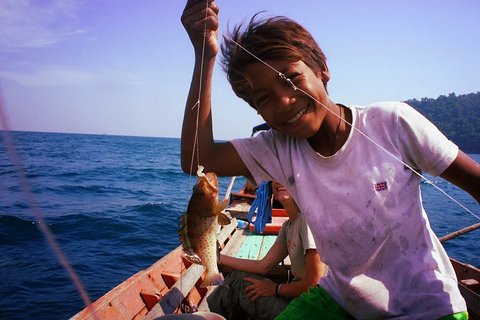 Sihanoukville is one of the best-known kept secret of Cambodia which consist of natural resource to support tourism industry in Cambodia. Recently, it is a second learn economy after Phnom Penh with the rise of factories and industrialization. Moreover, it is the second tourist destination after for those who wish to spend their time at the seashore. This completed travel service, will take you to explore this best-known kept secret site know as Koh Rong and Rong Sanloem where you can do diverse activities including swimming, snorkelling, fishing and quad bike (ATV) riding for your memorable journey. 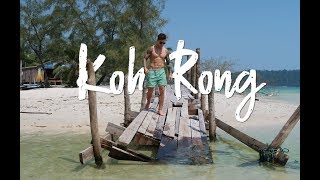 Best Things to do in Koh Rong, Cambodia

After spending 6 days on Koh Rong, exploring the jungle, partying, sleeping in hammocks and jumping off everything we could ... 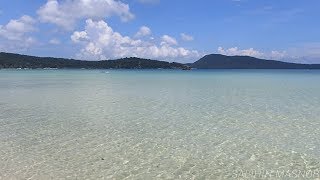 3 Things to Do In Koh Rong Samloem, Cambodia

Surely one of my favourite islands to date! Very laid back and peaceful (not many people too!). Only 3 things make it to this list ... 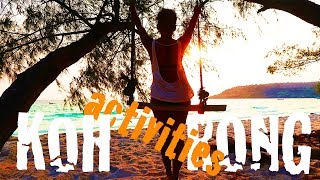 While we enjoyed the beach and sea a lot we were wondering what else you could do on Koh Rong. We went on an island tour ... 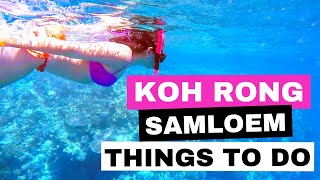 This EPIC island guide covers all the coolest things to do on Koh Rong Samloem Island Cambodia. We originally planned to visit ... 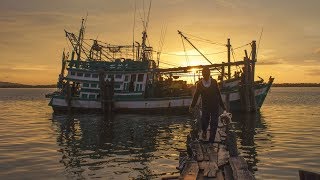 Here at the Top things to do on your own without a guide during your stay in Koh Kong Cambodia. Enjoy! Paracosm: A detailed ... 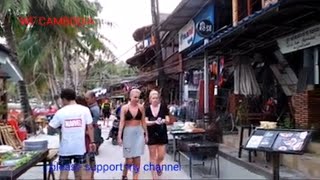 What to do in Koh Rong ! Koh Rong Day 2 ! Shihanouk Ville ! Cambodia 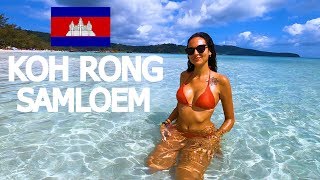 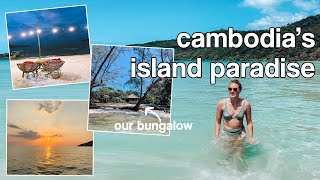 Koh Rong Sanloem exceeded our wildest dreams. What an amazing week we spent here! We did three nights at Saracen Bay ... 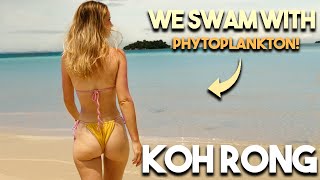 2 MONTHS FREE MUSIC FOR YOU VIDEOS: https://bit.ly/3EU8sKf In today's video, we explore the Maldives of Cambodia located ... 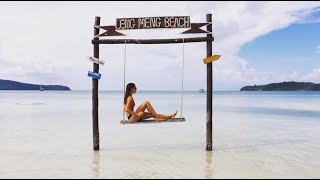 Ultimate Guide to Cambodia's Beaches and Islands | Can Travel Will Travel
www.cantravelwilltravel.com

About 1hour by high-speed ferry from Sihanoukville, Koh Rong Island has, over the years, earned the reputation of being the party island of Cambodia. Whilst this is certainly true for ...

Activities and things to do on Koh Rong | Move to Cambodia
www.movetocambodia.com

If you are just on Koh Rong to party, you’ll have no problem giving your liver a workout. Every Thursday and Sunday there’s a Koh Rong pub crawl that leaves ...

The Best and Most Beautiful Beaches in Cambodia - WanderWisdom - Travel
www.wanderwisdom.com

Koh Rong has very few people living on the island and a cluster of four villages. These have guest houses and bungalows which make great places to stay while you ...

Best Places For Couples To Visit In Cambodia
www.dontgetserious.com

Koh Rong is popularly known as monkey island or island paradise by many couples who frequent the island. It is relatively an undeveloped tropical island and is home to isolated ...

Best Places to Visit in Cambodia - Stoked To Travel
www.stokedtotravel.com

But of course, there’s more that Koh Rong has to offer. Another highlight is to join an island hopping tour that finishes with an opportunity to swim with the glowing ...

5 Best Things to do in Koh Rong, Cambodia [with Suggested Tours]
www.twomonkeystravelgroup.com

Going to Koh Rong or Koh Rong Sanloem: Going from Sihanoukville to Koh Rong Island costs roughly $25 return for a fast ferry and includes transfers to and from the ...

Where to Stay in Siem Reap - Best Boutique Hotels and Stylish Resorts
www.grantourismotravels.com

Where to stay in Siem Reap should also be determined by the location. Close to the temples? Templation is perfect. Slap-bang in the heart of town? Hotel 1920 is for ...

Top Cambodia Beaches for the Perfect End to your Itinerary
www.templeseeker.com

The clue of this is in the name, with Lonely Beach sitting at Koh Rong’s remote northern tip. Lonely Beach is your unique opportunity to practice true beach life. It’s located in ...

11 Things to Do in Koh Rong That You Can't Miss
www.adventureinyou.com

Koh Toch (or Small Island) is also sometimes known as Pagoda Island because the island consists only of a pagoda, a couple of monks and a small walking track. But ...

Located 40minutes away from the Sihanoukville boat station, Nature Island is a remote hotel offering beachside bungalows. Another stay in paradise, Natural Island bungalows are situated right in the middle of ...

Monkey Island has an extensive and reasonably priced menu with large serving sizes and plenty of vegetarian choices. The homemade spicy beanball and hummus salad is a winner (and also ...

Long Beach is about 7km long and also the longest beach in Koh Rong Island. When we got there, it was still wild. Unfortunately, the Royal Group is cutting the ...

Song Saa is an island resort located near the coast of Cambodia. The resort offers ultra-luxurious villas that are spread over a pair of Cambodia’s Koh Rong Islands. This fantastic ...

You might want to choose between Koh Rong and Koh Rong Samloem and only put one island on your itinerary. If you are not so much of ancient history buff, spend ...

9 Things to Know Before You Visit The Koh Rong Islands — ALONG DUSTY ROADS
www.alongdustyroads.com

You can’t drink the water from the tap on the Koh Rong Islands, which means many travellers consume a ridiculous amount of single-use plastic. Obviously, this is problematic. We travel ...

If you want to be near Long Beach, stay at the Soksan Eco-Tourism Guest House, a basic but comfortable eco-lodge right on the water. If you’d rather be closer to ...

What I have seen on the Island, I would recommend Koh Rong Island, is a romantic place. So, The Island is the place for Honeymooners,young couples, backpackers single, relaxation, and party ...

Sand: Completely opposite from the white sands of Saracen Bay, Lazy Beach has soft golden brown sand. This gives it a unique look to the rest of the beaches ...

The beaches and forest on Koh Rong are beautiful, but what makes it even more special is the marine life in the surrounding seas. These can be enjoyed on a ...

Koh Rong Samloem Island in Cambodia - We Are From Latvia
www.wearefromlatvia.com

What you can do on the island – swimming, snorkeling, chilling on the beach or in the beach bars. Stand up paddle (SUP) boards, snorkeling equipment and kayaks are available ...

Most Unique and Adventurous Things to Do in Cambodia - Go! Girl Guides
www.gogirlguides.com

You’ll never go wrong exploring the beaches at the island of Koh Rong. Stay through the night, though, and the real magic begins. Wade into the water about a meter ...

The sea gets really rough during the rainy season and all aquatic activities in the Island are considered extremely dangerous and risky, so make sure to check before you go. ...

I also visited the Vietnamese floating villages, that Ko Trong is popular for, giving the inhabitants probably a little bit of a zoo-feeling while taking pictures from a nearby hill. ...

Places to Visit in Cambodia – Just Heading Out
www.justheadingout.com

Where to stay: If you’re on a budget, check out Old Souls in M’Pai Bay and Jungle Republic in Saracen Bay. On Koh Rong, Monkey Island has affordable dorms and ...

Women Who Travel Solo: Kaitlyn Knoll on Solo Travel in Cambodia – Something In Her Ramblings
www.somethinginherramblings.com

My favorite place in Cambodia is the incredible Long Beach, off Koh Rong Island. It is one of the most stunning beaches I have ever been to. You can also ...

Rory and Melita stumbled across Song Saa by chance. They were looking for land to buy on the large, neighbouring island of Koh Rung. Word got out, and the chief ...

If you like your coffee first thing in the morning (as I do), I would recommend Monkey Island Resort – A 5 minute walk along the beach heading right as ...

Things I Wish I Knew Before Going To Cambodia  - Zafigo
www.zafigo.com

Do you remember that enchanting scene in Avatar where all the trees lit up in the dark and magnificently throbbed to the spirit of the earth? You can experience this ...

HOW TO GET AROUND CAMBODIA WITH KIDS - Mumpack Travel
www.mumpacktravel.com

When the bus timetable didn’t meet up with our boat from Sihanoukville to Koh Rong Island we took a private car. It was a new car and the driver was ...

There are a number of ferry options departing from Sihanoukville to the Koh Rong islands, but it’s good to know that the information is difficult to come by and expect ...

Best Things to Do in Koh Samui: The Ultimate List
www.adventureinyou.com

Koh Samui is a HUGE island. While you can easily drive around the entire place in 3-4 hours, you will find that there is so much to see and do. ...

If you feel safe on two motorized wheels, for me, there’s nothing better than exploring Koh Samui on a scooter. It gives you flexibility and you can easily drive to ...