Visit our Glasgow destination hub for day by day itineraries, top things to do in Glasgow and more!

The Isle of Skye, or simply Skye , is the largest and northernmost of the major islands in the Inner Hebrides of Scotland. The island's peninsulas radiate from a mountainous centre dominated by the Cuillin, the rocky slopes of which provide some of the most dramatic mountain scenery in the country. Although it has been suggested that Sgitheanach describes a winged shape there is no definitive agreement as to the name's origins. The island has been occupied since the Mesolithic period, and its history includes a time of Pictish, Celtic and Norse rule and a long period of domination by Clan MacLeod and Clan Donald. Wikipedia 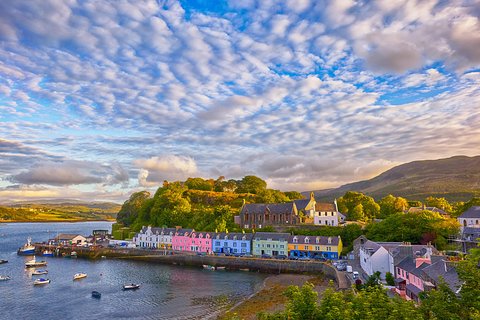 Immerse yourself in the wild beauty of the Scottish Highlands and Isle of Skye on this 3-day small-group tour from Edinburgh, with accommodation and round-trip transport included. Drive through the magnificent Highlands, including Glencoe, and cross to the Isle of Skye for a free day to explore this rugged island. On the last day return to Edinburgh with a stop at Loch Ness to look for its legendary monster, "Nessie". Your small-group tour includes breakfast each morning, and personalized attention from your guide with numbers limited to 16 people.

Scotland is a big place and with so many amazing places to explore you’ll be right to be excited about your 3 day Isle of Skye, Inverness & Highlands tour. With a guarantee of discovering new and interesting things and seeing breathtaking scenery and landscapes around every turn. You’ll see why so many movie locations were based and filmed here in Scotland, with views that inspired the likes of Harry Potter (Glenfinnan Viaduct) and James Bond (Glencoe), and more. You’ll be spoilt for choice for getting that perfect picture, especially in the Isle of Skye where many of Scotland’s myths and legends come from. See mountains created by giants, enchanted waters that will give you eternal youth, and hear songs of the faerie folk in the wind. This is a tour that will fill you with joy and leave you with a feeling that can only come from being truly immersed in the moment - something truly priceless. Don’t just take our word for it, check out our reviews! 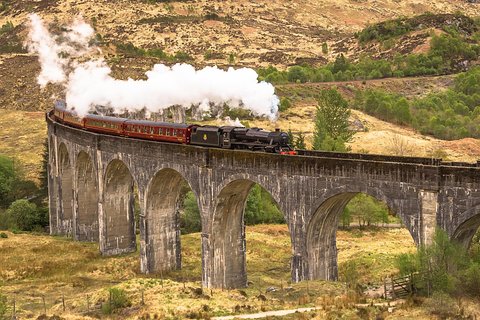 Experience the Highland beauty of the Isle of Skye on a 3-day excursion from Edinburgh. You'll spend two nights on the Isle of Skye, see legendary Loch Ness and ride one of the world's most famous steam trains, the West Highland Line, as seen in the Harry Potter films.

3-Day Isle of Skye and Highlands Tour from Edinburgh 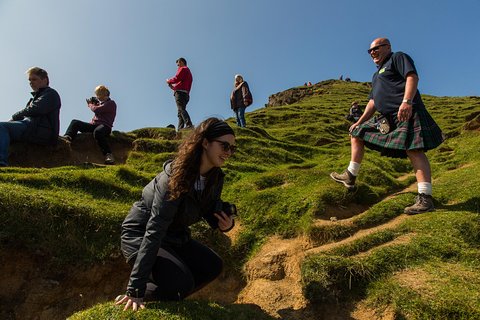 Isle of Skye, The Highlands and Loch Ness- 3 Day Group Tour from Edinburgh 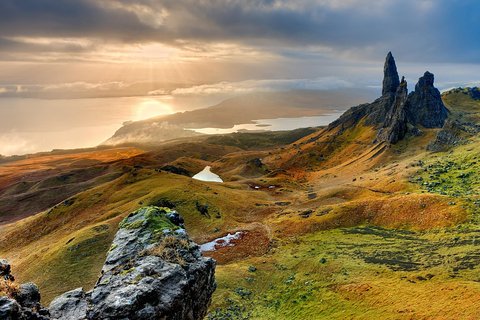 Discover one of Scotland's most beautiful islands, the Isle of Skye, on a fantastic 3-day tour. See Eilean Donan Castle, visit Loch Ness, traverse Glencoe and more with your guides as the tour lets you see the best Scotland has to offer. Choose between single, double, or no accommodation at time of booking and travel by air-conditioned coach throughout your journey.

Multi-day
Likely To Sell Out
from £175
Buy Now 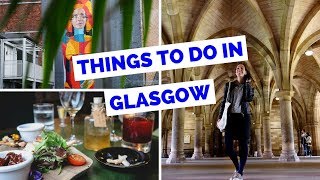 20 Things to do in Glasgow, Scotland Travel Guide

Join us for this travel guide to Glasgow, Scotland as we highlight 20 of the best things to do in Glasgow including visiting ... 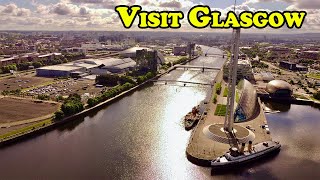 Top 10 Things to do in Glasgow | Top5 ForYou

Welcome to Top5 ForYou. In this video we will share the Top 10 Things to do in Glasgow. Glasgow is a gorgious city to visit ... 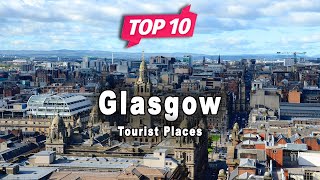 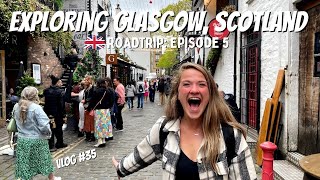 Exploring The BEST Things To Do In GLASGOW!!🏴󠁧󠁢󠁳󠁣󠁴󠁿

Today w'ere exploring the best things to do in GLASGOW, SCOTLAND!! ▻ Subscribe - https://bit.ly/ProbablyLostSubscribe ... 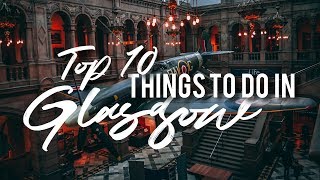 Top 10 THINGS to do in GLASGOW // Scotland Travel Guide

Top 10 THINGS to do in GLASGOW **PLEASE NOTE - THIS LIST IS NOT IN ANY PARTICULAR ORDER** We decided to ... 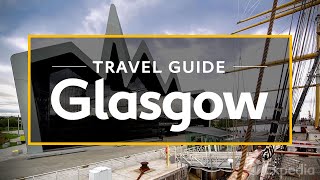 Glasgow – a city whose industrial roots and cultural bloom makes it the charming vacation destination it is today. Check out all the ... 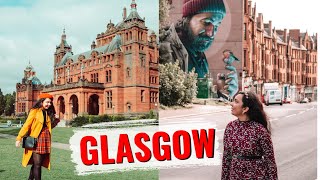 My first time in Glasgow, SCOTLAND! Things to do,Ultimate Guide!

Hidden gems of Glasgow... Historic sites... Shopping.. Everything and more is captured in this informational vlog on Glasgow ... 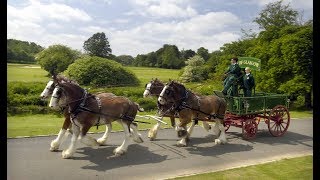 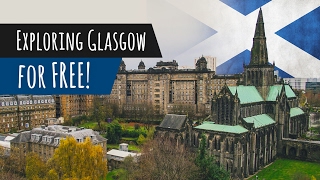 Glasgow City Guide - 4 Fun and FREE Things to do in Glasgow, Scotland!

Glasgow City Guide - 4 Fun and FREE Things to do in Glasgow, Scotland! We've been having an amazing time exploring ... 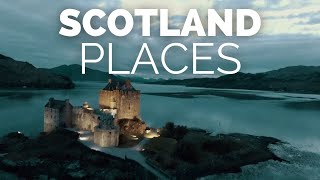 Check out all the places seen in this video: https://www.touropia.com/best-places-to-visit-in-scotland/ At first glance, the Scottish ...

Applecross in West Ross requires a drive along the highest road in Britain until eventually arriving at the Applecross peninsula. Apart from the views across to the Isle of Skye ...

Plus, I wanted another reason to take some epic hikes and walks through the Scottish countryside after my Old Man of Storr hike was so memorable. From the Isle of ...

Best Things to do in United Kingdom | What to do in UK
www.adequatetravel.com

The most lovely places in the United Kingdom, the Isle of Skye is best visited in summers. At the point when the ice has dissolved, the green scenes with the ...

3-Day Isle of Skye and Highlands Tour from Glasgow – experience the best of the Scottish Highlands and include a day on Isle of Skye in this three day tour. ...

Dean Village...Why it Needs to be on your Edinburgh Itinerary – Scotland – Earth Trekkers
www.earthtrekkers.com

PLACES TO VISIT IN THE ISLE OF SKYE: For an overview of must-have experiences on the Isle of Skye, read our article Best Things to Do on the Isle of ...

Travel along the shores of Loch Ness, keeping your eyes peeled for Nessie along the way! Head over the mountains to the Valley of Glen Sheil and on to the ...

It is time to head across the northern part of our itinerary, first driving through the northern capital of Inverness and then onto the Isle of Skye. Today consists of ...

Given the beautiful sights and scenery that you are no doubt going to see around the Isle of Skye, we highly recommend packing a good camera for your trip. If ...

Mallaig is the port for many boats going out to the islands, namely the Isle of Skye. While there’s a good chance you can walk onto a boat the day ...

7 Things to Know When Planning Your First Trip to Europe | Earth Trekkers
www.earthtrekkers.com

You can also do a quick hotel search to make sure that there are no surprises with hotel costs or availability. If you are booking your trip well in advance ...

The best 22 hidden Europe gems to travel to in 2022
www.danflyingsolo.com

Scotland has indeed been basking in the tourism spotlight in recent years, with the Edinburgh Festivals going from strength to strength, the Isle of Skye hitting peak tourism, and new coastal drive ...

This small-group tour will take you from Edinburgh and into the Isle of Skye and Scottish Highlands. You’ll see Scotland’s rugged northwest coast, as well as Glencoe and Loch Ness. ...

21 Fun Things to do in the Scottish Capital (Edinburgh)
www.theworldpursuit.com

Our picks? I personally love the smokiness of peat from Islay whisky and would choose the Lagavulin (rejoice Parks & Rec fans!), while Natasha would go with a 15 year ...