Visit our Lahore destination hub for day by day itineraries, top things to do in Lahore and more!

The Walled City of Lahore , also known as Old City, forms the historic core of Lahore, Pakistan. The city was established around 1000 CE in the western half of the Walled City, which was fortified by a mud wall during the medieval era. The Walled City rose in prominence after being selected as the Mughal capital, which resulted in construction of the Lahore Fort - now a UNESCO World Heritage Site, as well as the city's new reinforced walls. The Walled City was bestowed with numerous monuments during the Mughal era, with some of Lahore's most iconic structures being located in the Walled City, such as the lavishly decorated Wazir Khan Mosque, the massive Badshahi Mosque, and the Shahi Hammam. Wikipedia 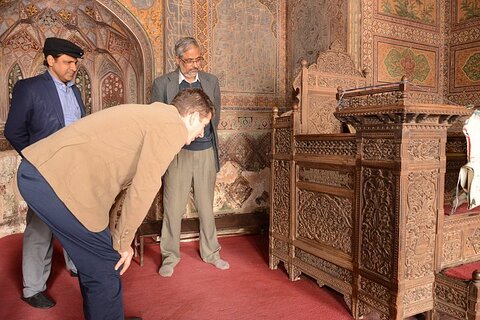 Explore one of the most cultural and historical attraction from The city of Lahore offers during this 4 - hours guided walking tour. Lahore is famous for its food, ancient ruins, unique Mughal Architect and beautiful Mosques. You will undeniably endorse and admire it during this amazing trail. You will be visiting Masjid Wazeer Khan, Shahi Hammam, Royal Trail, Kashmir Bazar and many more other attraction. Optional Rangila Rishkaw (Colourful Tuk-Tuk) is also available if you are not in a mood of walk. Walled City of Lahore is best of best Lahore offers. You will be offered various options for transportation. Instead of car you may also request for Tuk - Tuk (Trishaw) or Horse Carriage to have different type of experience. 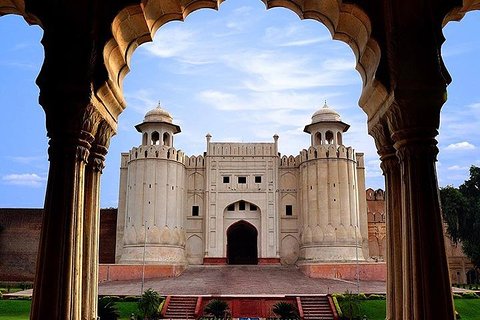 Lahore is the capital of Punjab also second largest and historical city of Pakistan. Lahore city tour includes sightseeing of some historical buildings of South East Asia and of Mughal Dynasty.The city was established around 1000 CE and was covered with a mud wall having 13 Gates .This wall was covering the Lahore City of that Era and has a lot of historical places. 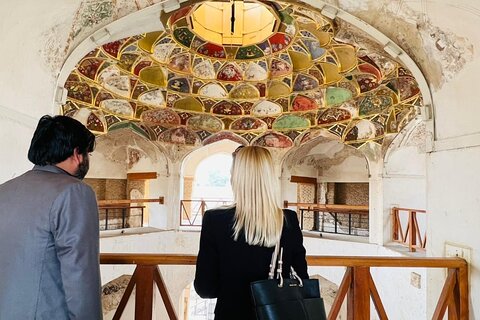 Peshawar is the capital city of Pakistani province of Khyber Pakhtunkhwa, recorded history dates back to at least 539 BCE. Visit Peshawar Museum, an artistic wonder built in 1906-07 in the memory of Queen Victoria. Explore “The Mahabat Khan Mosque” which is a 17th-century Mughal-era mosque in Peshawar. Kissa Khwani Bazaar is another gem in outskits of Peshawar which is famous for Chai and Qehwa houses, and also because several famous Indian movie actors have origins and family ties in the region. Indian film actor Dilip Kumar was born in Qissa Khwani Bazaar. Next, The Sethi Mohallah sometimes called Sethian Mohallah, is an old and traditionally arranged neighbourhood in the old city of Peshawar, that were built in a style reminiscent of Central Asia with elaborate wooden carvings. The houses were completed in the late 19th century. Walled City of Peshawar is also included in the tour. The oldest portion of city of Peshawar is Walled City. 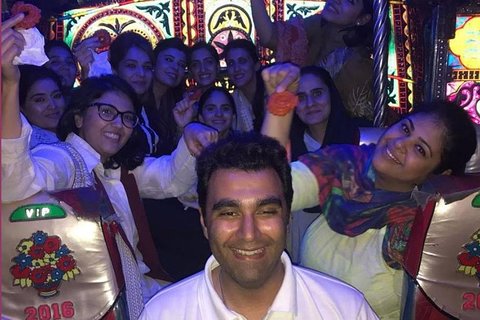 “The City of Lights” has a burgeoning local food scene, an authentic food palette parallel to no other. Jalebi Express sifted through various parts of old town Karachi and found some of the most highly rated joints among the local eateries to leave your taste buds soaring. The food trail is not for the lighthearted nor light stomached folks wanting a local experience. We have not only sorted out the savory items but have gone the extra mile (Literally) to make you experience local drinks like Lassi and Limca and exotic ice cold deserts like “Gola Ganda” or Peshawari “Ice Cream” and of course some warm and sweet “Jalebis” to round up our wholesome food tour. Our team at Jalebi Express welcomes you on this unique fun filled journey where you find the atmosphere is melancholic, the surroundings are unique, the company is surreal, but most of all the experience that you take away and the memories that you create are invaluable. Let’s go! 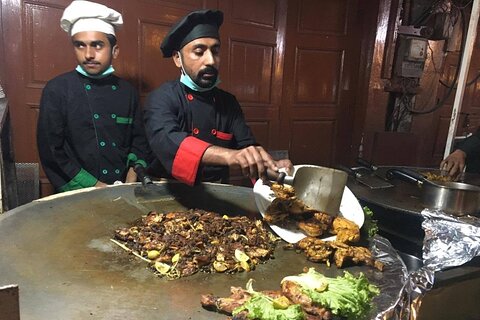 Meet your guide at a "Delhi Gate" Walled City in the evening. Walk through Walled City with an expert local food guide, sampling some of the Punjab's capital’s legendary street food and historical attractions. Walk through the buzzing bazar as you stop at famed street vendors for local favorites like the city’s “best Gool Gapa", “Dahi Bhalay”, and some tasty Punjabi “Fruit Chaat”. As you snack, your guide helps explain the cooking techniques and ingredients that make these simple dishes so delicious. Continue your nighttime adventure by visiting Shahi Hamam,, a Spice Bazar and Masjid Wazir Khan a collection of Old Town landmarks after dark. The different atmosphere after the sun has set makes for a unique experience. You final meal course will be at Haveli Restaurant Fort Food street which just not only offer the most delicious food but also spectacular view. Your guide delivers you back to Delhi Gate where you can start exploring other part of city or can go back to your hotel. 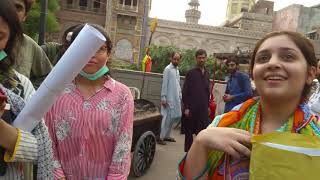 What to do in Lahore Pakistan. Inside the walled city. A must see. 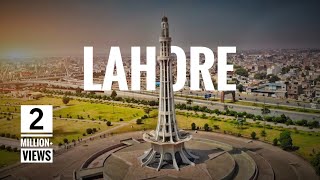 LAHORE Lahore لاہور‎, is the capital of the Pakistani province of Punjab. It is the country's second-most populous city after Karachi ... 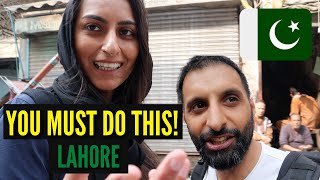 A must do in lahore / Top things to do

A MUST DO IN LAHORE! You should not miss this!!! Also in this video we include a must-visit list of what to see and do in Lahore, ... 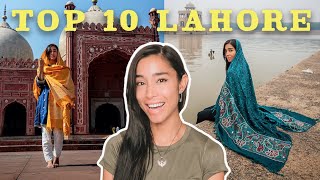 Lahore, Pakistan We are continuing our road trip around Pakistan, heading south to the city Lahore. Lahore is called the heart of ... 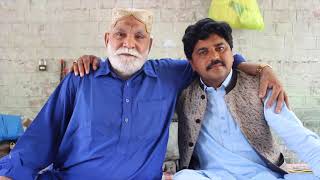 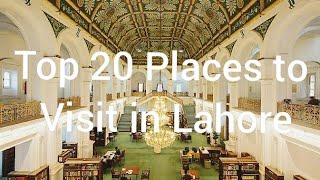 In this video you will know the 20 best places to visit in Lahore in less then 3 minutes. Lahore is the most beautiful and historical ... 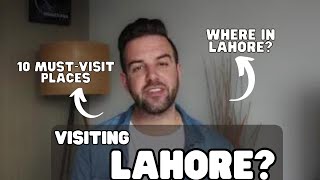 Top 10 things to do in Lahore!

My favourite things to do in and around Lahore! If you're interested, here is my review of the chai spots in JT; ... 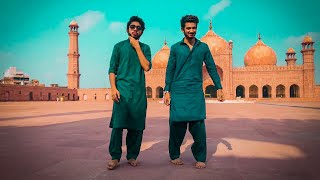 In this video I tell about What to see and where to go in walled city and the places I've been so click on to find out I'm a random ... 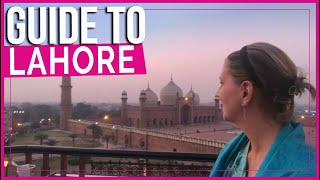 Pakistan | LAHORE Guide: What to See & Do UNESCO

If you're looking for a must-visit list of what to see and do in Lahore, Pakistan ... this is it. You'll start mid-morning visiting historic ... 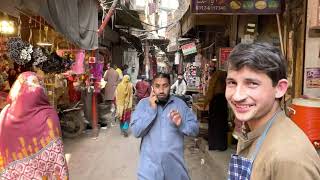 A walk in Lahore Pakistan Walking in Lahore Walled city, also known as The Old City - This part of Lahore is impressive from the ...

Lahore is huge, and to my knowledge, there is no hotel of acceptable standards inside the Walled City. It means that wherever you stay, as close it may seem on ...

Who says all adventure has to be had in the wilderness? The Walled City of Lahore is a world unto itself – twisting alleyways and hidden gardens, exuberant locals and ...

That happened almost 1400 years ago, and the Walled City of Lahore fills with mourners on ‘Ashura’ each year on that date. Dressed in black, the devotees recite poetry and ...

For me, this means the shalwar khameez, perhaps with leggings instead of the loose shalwar pants. As Lahore is a city, no one will say anything to you if you ...

30+ Unique Things To Do In Lahore, Pakistan | Lost With Purpose
www.lostwithpurpose.com

A state of trance at a Sufi dhamalLive music at a liberal outdoor cafeEat your way down the original food streetBooze behind the scenesGo with the flow in Anarkali BazaarVisit ...

Things to do in Lahore, Pakistan for the first time traveler
www.onceinalifetimejourney.com

There are two “Crown Jewels”of Lahore: Badshahi Mosque and the UNESCO Heritage listed Lahore Fort. A walk through the Old Walled City is a revealing and magical experience and Fakir ...

Back out on the main road, you can deviate into the Walled City through Bhatti Gate, getting lost in the labyrinthine streets. Make sure you visit Wazir Khan Mosque and ...

Wazir Khan is inside the Walled City, only several hundred meters from the Delhi Gate entrance. While you’re there, take a stroll around the Old City- there’s truly always something ...

Though you can make a point to hunt down the famous places to visit in the Walled City of Lahore, to truly experience the magic of the Walls is to ...

You can climb or take the lift to the top for an excellent view of the Lahore fort, Badshahi Mosque. the Tomb of Ranjit Singh etc. The dancing fountains are ...

The market is bustling with action, movement, and beautiful colours, and the atmosphere there is absolutely incredible. It also carries an incredible history; it’s one of the only 6 gates ...

Today will be the first official day of the trip. Your introduction to Lahore may have shown you the chaos and mayhem of the city. Today will give you another ...

Nevertheless, it’s highly important to remember that this is not Amsterdam and or Parvati Valley– exercising regular precautions and not doing something ridiculous like lighting up in the middle of ...

Old Lahore, or the Walled City of Lahore, is a historical area of Lahore with 13 gates, and you can reach Wazir Khan Mosque through one of these gates, the ...