Visit our Mendoza destination hub for day by day itineraries, top things to do in Mendoza and more!

Aconcagua is a mountain in the Principal Cordillera of the Andes mountain range, in Mendoza Province, Argentina. It is the highest mountain in the Americas, the highest outside Asia, and the highest in both the Southern and the Western Hemispheres with a summit elevation of 6,961 metres . It lies 112 kilometres northwest of the provincial capital, the city of Mendoza, about five kilometres from San Juan Province, and 15 km from Argentina's border with neighbouring Chile. The mountain is one of the so-called Seven Summits of the seven continents. Wikipedia 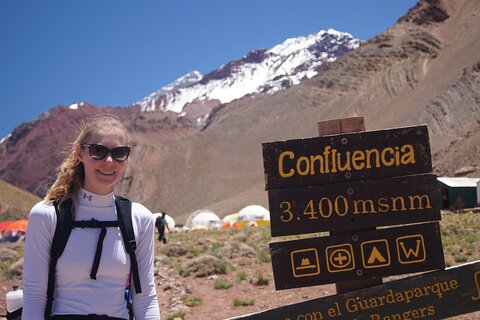 It is the first camp on the way to the highest mountain following the Himalaya and the highest in the Americas: Aconcagua. On the way to one of the 7 highest peaks in the world, all travelers arrive at Confluencia, located in Quebrada de los Horcones (Mendoza) at 3,400 meters above sea level. There, you will have a glimpse of mountaineering and the pleasure of being in nature, in the middle of a small country village. We look forward to having you on this adventure, where you will enjoy the majestic landscape of rivers and highlands, and the view of the southern wall of Aconcagua. The hike is of moderate difficulty, so it is important to exercise frequently. Located in: the base of Aconcagua in the Central Andes mountain range. 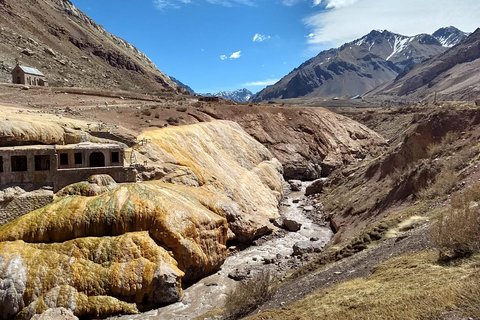 Ride the Route 7 mountain range, taking into account the majestic Andes Mountains. The first stop is at Potrerillos del Río Mendoza, which follows the road during the excursion. We continue traveling through a tunnel area and then into the Uspallata Valley, which separates the pre and the front ridge. Then we started up the high mountain road. We will reach Los Penitentes. We continue to travel the international route in a landscape framed by the Andean massif and bordering the old railway line. We arrive at Puente del Inca, a natural bridge with hot springs and a rich history. Then the mountains open to show Aconcagua, stop at the Mirador. Finally we come to the city of Las Cuevas and the weather permitting, we go to Christ the Redeemer. Lunch at the restaurant or option to make our own barbecue with chef. Return to the city of Mendoza. Potrerillos Dam Uspallata Puente del Inca Aconcagua Lookout 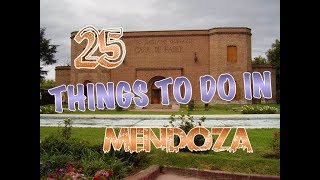 Top 25 Things To Do In Mendoza, Argentina 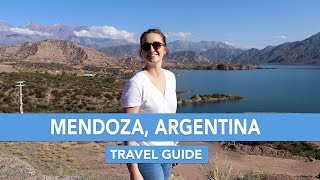 TRAVEL GUIDE! Mendoza, Argentina. What to do, what to see and where to eat and drink. Winery tour vlog: ... 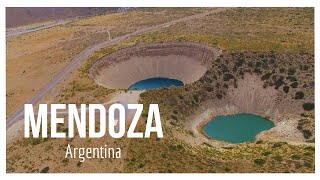 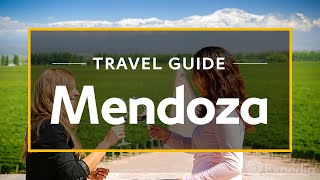 Mendoza – Welcome to the Land of Sun and Good Wine. Check out the coolest spots to explore in this Argentine city. When ready ... 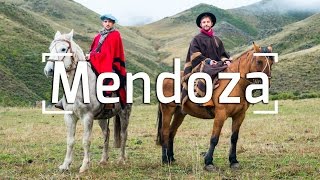 Alamos Wines invited us to Mendoza, Argentina, the best wine region in Latin America & home to the legendary Malbec grape, ... 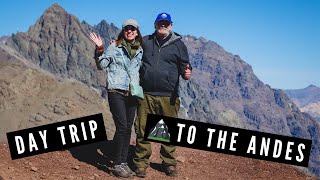 Come join us on day trip from Mendoza, Argentina as we take a high mountain tour of the Andes. After several days spent touring ... 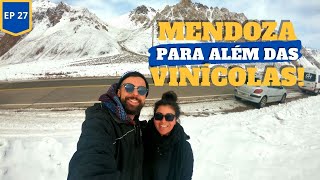 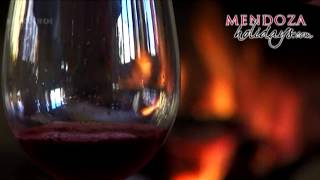 What to do in Mendoza? 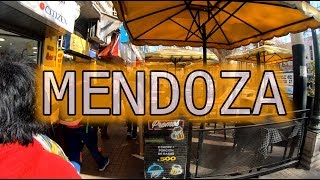 This is a virtual travel tour for Mendoza, Argentina. In the the travel tour I show you around the things to do in Mendoza Argentina. 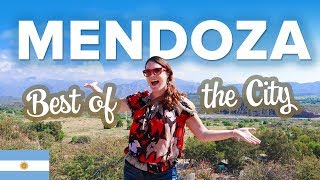 This we're exploring the city of Mendoza in Argentina! To start things off we headed to the edge of town to find a great viewpoint ...

The 6,962 meter tall Aconcagua is the highest mountain in the Americas and one of historical importance to Argentina and Chile. During the war with the Spanish Empire, the mountain ...

Mt. Aconcagua is the tallest mountain in both the western and southern hemispheres. The National Park is located 193 km (two and a half hours by car) from Mendoza. This ...

Our Favorite Things To Do In Mendoza (That Aren’t All Drinking Wine)
www.mowgli-adventures.com

Mount Aconcagua is the tallest mountain outside Asia, located 125 miles (200 kilometers) from Mendoza city near the Chilean border. If you’re looking to challenge yourself and experience some of ...

Climbing Aconcagua is an activity for true adventurers. Aconcagua is the highest mountain in the Andes and one of the world’s Seven Summits. It’s an exceptionally appealing destination due to ...

One of the world’s Seven Summits, Aconcagua is the highest mountain in the Andes. It is an exceptional tourist attraction in Argentina for its immense height and accessible climb. The ...

The highest peak in the Southern Hemisphere (6960 m), Aconcagua offers an incredible panorama, and can still be enjoyed if you do not plan to climb it. It’s located in ...

Mendoza is one of the well-known wine destinations of this country as well as this planet. This city is positioned in the largest wine producing area of Latin America. Aconcagua ...

Visit the heart of the world renowned Argentine wine industry and spend a weekend exploring Mendoza, next to Aconcagua, the highest mountain outside of the Himalayas. While it is located ...

The Coolest Things to Do in Mendoza, Argentina (Lots of Wine & Nature)
www.desktodirtbag.com

Cordon del Plata is found near the highway that leads to Aconcagua (and Santiago), the highest mountain outside of Asia. Over the years, Cordon del Plata became admired by many ...

The Mapuche people were universally recognized as the most courageous natives in the area. They spoke ‘Veliche’, a dialect of ‘Mapudungun,’ a language shared among different tribes stretching from Aconcagua ...

The Best 10 Days in Argentina Itinerary: 7 Routes Created by a Local
www.solsalute.com

With your second and last full day in Mendoza, head into the mountains to see one of the world’s tallest peaks, Aconcagua. This guided tour is one of the most ...

Mountaineers from across the globe come to climb Aconcagua, South America’s highest peak at more than 22,800 feet tall. Every year thousands make the pilgrimage to Argentina to accomplish this, and ...

10 places to visit in Argentina that should be on your itinerary
www.psimonmyway.com

Get those hiking gears ready and trek to the Western Hemisphere’s highest mountain. The journey to the summit, 7,000 feet above the ground, is definitely exciting but requires a substantial ...

You can’t miss the Andes as they are almost everywhere you look, but you should spend at least a day getting even higher into their midst. The Alta Montaña route ...

The Best Things To Do In & Around Mendoza, Argentina - Goats On The Road
www.goatsontheroad.com

We loved Mendoza. We knew that we were going to enjoy the wine, but we were surprised by the energetic city, the funky bar scene, the beautiful San Martin Park ...

I definitely think I chose wisely how to spend a weekend.  While another day would have allowed me to go to the base of Aconcagua (I really wanted to do ...

One of those “challenging peaks” I mentioned above would be Aconcagua.  The highest mountain in the Andes, despite the fact that winds are ridiculously strong and the light is almost ...

Fenix de los Andes – this is a Spanish guiding company only (no English guides) but their prices are much lower than many of the other tourist companies. They ...

The hike to Confluencia and the summit of Aconcagua begins at Horcones Valley. The entrance to Parque Provincial Aconcagua is located on Route 7 just 15 km away from the ...

Several hundred wineries are located within about an hour drive – mostly appointment only; the wine the region is most known for is Malbec. The Andes are a bit further ...

Things to Do in Mendoza, Argentina - Hike Bike Travel
www.hikebiketravel.com

The Puente del Inca is a natural bridge that crosses the Vacas River. It can be visited as part of a day trip to see Aconcagua though be prepared. It’s ...

Next up, it’s the highest mountain outside of Asia: Aconcagua. The bus will bring you to an amazing overlook where you can learn about this iconic peak and take photographs ...

5. Mendoza – Mendoza is located in the Latin America’s largest and most popular wine-producing region and there is no wonder why some of the best wine in the world ...

If you are looking for a great hike to do nearby, you can hike to Confluencia, the first base camp on the way to the summit of Mt Aconcagua.The hike ...

The capital city of Mendoza Province, located on the eastern side of the Andes. Mendoza is a popular tourist destination not only for its wine but also for its proximity to Aconcagua, the ...

Top Things To Do In Argentina: Tourist Attractions
www.wanderingtrader.com

Be sure to set aside time for viewing the varied countryside.  There is an extremely colorful Inca Bridge to see in the region and the tons of plazas to get ...

In such a massive area, the geography is immense and diverse, with an extremely varied climate. From the hot and dry northwest to the thunderous glaciers of Patagonia, from the ...