Saint Joseph's Oratory of Mount Royal is a Roman Catholic minor basilica and national shrine located at 3800 Queen Mary Road on Mount Royal's Westmount Summit in Montreal, Quebec. It is a National Historic Site of Canada and is Canada's largest church, with one of the largest church domes in the world. Founded in 1904 by Saint André Bessette in his patron saint, Saint Joseph's honour, the Oratory was brought alive through the work and ingenuity of numerous architects and thousands of workers in a process spanning six decades. With its monumental scale, Renaissance Revival facade and contrasting Art Deco interior, the Oratory is recognizable not just in Montreal but around the world, attracting more than 2 million visitors and pilgrims to its steps each year.The Oratory is the highest building in Montreal, rising more than 30 meters above Mount Royal's summit, allowing it to be seen from many kilometers away. Wikipedia 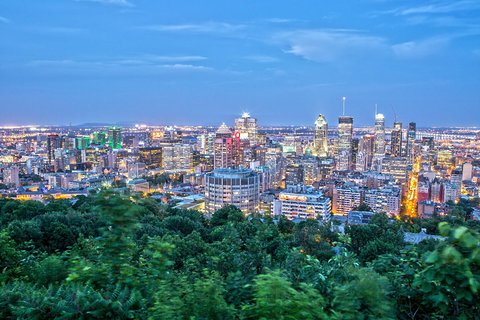 Fun and excitement lie ahead in our Scenic Montreal Night Tour. Your guide will pick you up directly from your hotel in downtown Montreal before heading out on a narrated driving tour of Mont Royal and Saint Joseph’s Oratory, Canada’s largest church. Your guide will then bring you to the Mont Royal Lookout, the tallest spot in the city where you can look out at the city’s illuminated skyline and surrounding nature. Next you will explore more of Montreal’s cultivating night life with a narrated drive through Old Montreal where you will stop to view the Notre Dame Basilica, the mother church of Montreal, a masterpiece of Gothic Revival architecture. After admiring the Gothic architecture of the Notre Dame Basilica you will head to your final stop, La Grand Roue. Here you will ride the largest ferris wheel in Canada and enjoy a tasty local snack from nearby vendors. At the end of your tour, your guide will drop you back off at your hotel in downtown Montreal. 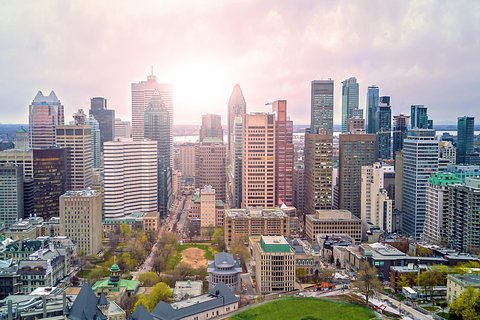 Your tour will begin with a drive through Westmount on your way to Mount Royal. Along the way, you’ll pass by the famous St. Joseph’s Oratory, Canada’s largest church. At Mount Royal, you will take in beautiful views of the city skyline and nature and snap some pictures while you’re there. Following a view of the beautiful downtown Montreal, head out through some more of the city as you work your way towards the world-famous Olympic Park which was the main stop for the 1976 Olympics. Next, you will head to Notre-Dame Basilica. This magnificent Gothic Revival style church features incredible architecture and impressive stained glass window displays adorn the interior. Your final stop on the tour is the Old Port of Montreal where you will board a St. Lawrence River Cruise (Seasonal). For 90 minutes, you’ll enjoy a relaxing ride on the river, taking in incredible views of the city and learning about the area’s fascinating history. 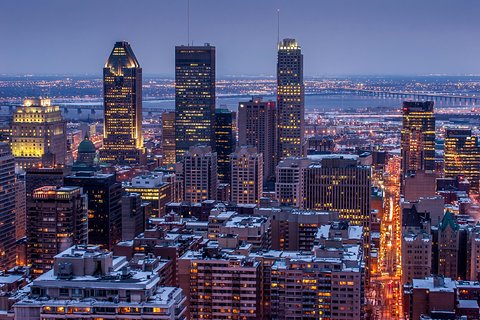 What about seeing the main attractions of Montreal by night, in small-size group with accredited tour guide in a comfortable vehicle? Your guide will take you on a drive where you will appreciate the city lights and main attractions of Montreal. You will pass by impressive monuments, such as Saint Joseph's Oratory, the illuminated Jacques Cartier Bridge, Notre Dame Basilica, Montreal City Hall and many more. The tour starts with a drive from the busy commercial downtown to Mount Royal via the upscale neighborhoods of Westmount. You will see breathtaking panoramic views of the city from above. The city night life areas will be next as your guide drives you through streets where the vibrant nightlife takes place. Once you cross the Jacques Cartier Bridge and appreciate its magnificent light show, you will see Montreal skyline. With a visit of the Old Montreal and Old Port area you will get immersed in a magical atmosphere and be marveled by the city's historic architecture. 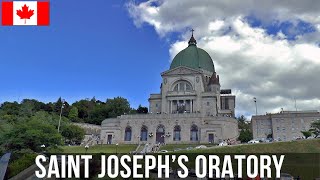 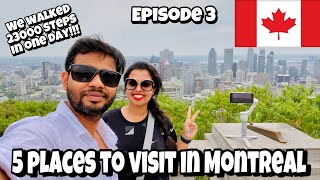 https://www.youtube.com/c/followtheimprints?sub_confirmation=1 Welcome to our channel. We visited Montreal in the third week ... 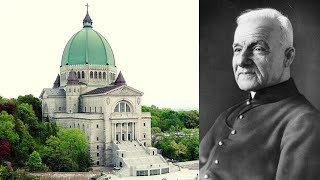 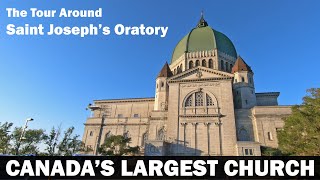 Join along as I walk around the Canada's largest church – Saint Joseph's Oratory of Mount Royal in Montreal, Quebec. 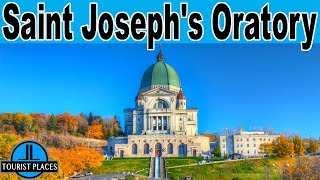 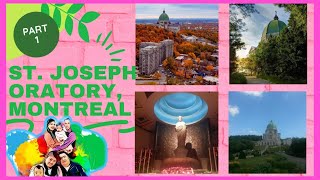 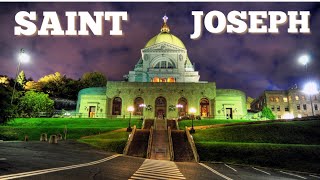 INSIDE THE DOME of Montreal’s Saint Joseph’s Oratory

I got access to the inside of Montreal's iconic Saint Joseph's Oratory. It's a magnificence church, a heritage site, in Montreal, ... 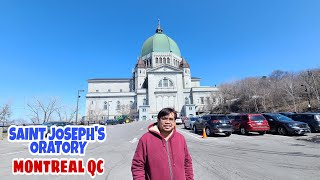 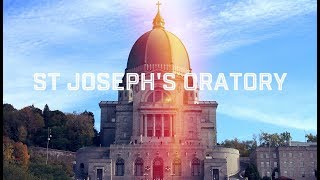 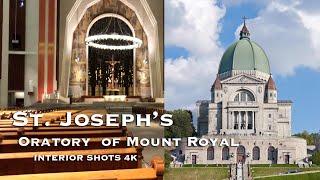 Top 10 Things To Do In Montreal
www.wowtravel.me

St. Joseph’s Oratory was designed in an Italian Renaissance style with a copper dome rising 97 meters (318 ft) high making it one of the biggest of its kind. The ...

Montreal is a city best explored on foot, so pack your trainers and take in the skyline atop Mont Royal. Lovingly referred to by locals as their “mountain”, Mont Royal ...

One Day in Montreal, Canada (Guide) – Top Things to Do
www.onedayitinerary.com

Saint Joseph’s Oratory of Mount Royal is a Catholic basilica atop Westmount Summit, one of Mont Royal’s three peaks. This place of worship is notable for being the largest church ...

How to Spend 2 Days in Montreal No Matter the Weather: A Montreal Itinerary - Rudderless Travel
www.rudderlesstravel.com

30 Best Things to Do in Montreal, Canada
www.travellens.co

The Saint Joseph’s Oratory of Mount Royal was authorized in 1910 by Pope Pius X and has remained a symbol of faith for the people of Montreal. In the older ...

The most Instagrammable spots in Montréal [part 1] | Tourisme Montréal
www.mtl.org

Hotspot: To get the full view of the steps leading to the Oratory and its signature dome, take your shot just inside the entrance gates (3800 Queen Mary Road).Nearby: The ...

As much fun as it is walking through a city you’ve never been to before, bus tours will get you around much quicker and let you see much more than ...

Things to Do for Christmas in Montreal
www.tripsavvy.com

The Oratory is open year-round, including on Christmas and New Year's Day, and access to the Oratory is free. However, there is a modest admission fee to enter the museum, ...

The highest point in Montreal, Oratoire Saint Joseph, is an essential place for pilgrims dedicated to Canada’s patron saint St. Joseph. The 318 feet Italian renaissance styled oratory has a ...

The Very Best Things to do in Montreal, Canada | The Planet D
www.theplanetd.com

While you are up in the Mount Royal area, be sure to check out another great Montreal Basilica, St. Joseph’s Oratory. This Roman Catholic minor basilica is Canada’s largest church and ...

Gaze at the city from the Mount Royal Chalet (Kondiaronk Belvedere lookout); join the tam-tam jam (hand drums); in the winter sled, ski, skate Beaver Lake, and snowshoe; or visit ...

Another grand religious site in Montreal, St. Joseph’s Oratory is a Roman Catholic basilica and national shrine, as well as Canada’s largest church. The construction of a smaller church began ...

The Trafalgar guide of where to go and what to do in Montreal, Canada
www.trafalgar.com

It’s also home to the grand Beckerath Organ, with pipes reaching almost 10 metres in length. You might like to listen to one of the Oratory’s public organ performances, or ...

THE TOP 10 Things To Do in Montreal | Attractions & Activities | Viator
www.thingstodo.webjet.co.nz

The capital of French-speaking Canada boasts an enviable combination of history, cuisine, and nonstop cultural happenings. Walking and biking tours are among the best ways to explore the city’s neighborhoods—from ...

– The CageGood food, but it was open and a bird pooped on José. Well, yes, it wasn’t our lucky time. Or it was. The kids’ menu is a whole ...

My trip to Montreal — One of the best cities to visit in Canada - Living + Nomads – Travel tips, Guides, News & Information!
www.livingnomads.com

Bistros and fine restaurants are abundant, and the city’s bakeries are among the world’s best. Begin your day with a café au lait, and a buttery croissant at the Duc ...

Alticane Road ends at the T-intersection past St. Joseph’s Church. Turn west and follow the gravel road for 8 km or so to the village of Mayfair. From Mayfair the ...

Five Days in Montreal -Claire Arendas takes us on her quick trip to Canada
www.trippinwithtara.com

We spent the entire day on three things. The first exploring the beauty of St. Joseph’s church. Located at the top of Mount Royal, not only does it have a ...

Can’t make it to the Notre-Dame Basilica? Go instead to St. Joseph’s Oratory of Mount Royal, which is topped with one of the world’s largest domes. Or, head to Mary ...

3.  St. Joseph’s Oratory is the largest church in Canada and the dome is second only to St. Peter’s in Rome. St Joseph is the saint who oversees everyday life: ...

15 Romantic Things to Do in Montreal
www.twodrifters.us

Get in touch with your more spiritual side with a visit to Notre-Dame Cathedral, Montréal’s basilica and one of its most sacred spaces. Opened in 1829, the church is a ...

Near Mont Royal is St. Joseph’s Oratory. It is the largest church in Canada and almost a match of St. Peter’s in Rome and worth at least a walk-by for ...

29 Best Things to do in Montreal in 2022 | Splendid India Tours
www.splendidindiatours.com

While you are up in the Mount Royal area, be sure to check out another great Montreal Basilica, St. Joseph’s Oratory. Located on the west side of Mount Royal and ...

When Mark Twain visited Montreal in the 19th century, he nicknamed the city “la Ville aux cent clockers” (The city of a hundred bell towers). And why not? There are ...

Things to See and Do in Montreal, Canada | Freedom Tour Travel
www.freedomtourtravel.com

We also love Saint Joseph’s Oratory, Canada’s largest church. On site there is a shrine dedicated to Brother André, who performed miracles, that he credited to Saint Joseph. It is said that ...

Day 1: Arrive to Montreal as early as possible. Explore St. Joseph’s Oratory and Mont Royale.Day 2: Explore the Plateau in the morning and Old Montreal and Port in the ...