Visit our Nicosia destination hub for day by day itineraries, top things to do in Nicosia and more!

Selimiye Mosque , historically known as Cathedral of Saint Sophia or Ayasofya Mosque , is a former Roman Catholic cathedral converted into a mosque, located in North Nicosia. It has historically been the main mosque of the city. The Selimiye Mosque is housed in the largest and oldest surviving Gothic church in Cyprus possibly constructed on the site of an earlier Byzantine church. In total, the mosque has a capacity to hold 2500 worshipers with 1750 m2 available for worship. Wikipedia

Photogenic Nicosia with a Local 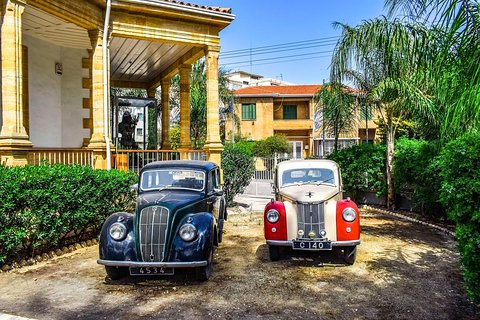 This Experience is provided by private Local. The group size is up to 8 people. Come with me to discover the city of Nicosia through your camera lens! Join me on this city walk for the unique opportunity of experiencing the city from an insider’s point of view and taking stunning pictures of it at the same time! Our walk will take us from the Mosque to the Famagusta Gate. While you use your camera to capture the beauty of Nicosia, you will also come across local spots and hidden gems that a typical tourist tour won’t show you. Treat your curiosity by discovering an alternative side of Nicosia and all the unique beauty it has to offer! Don't forget to book the Experience at a suitable time to have the best light possible for the pictures! You cannot leave the city without having captured its beauty from another century!

1 Hour Discovering Tour in Nicosia with a Local 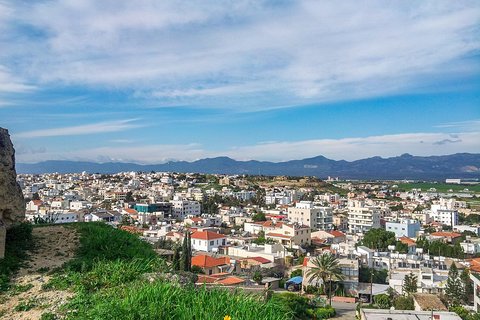 This Experience is provided by a private local. The group size is up to 8 people. You only have an hour to fall in love with Nicosia? Challenge accepted! Discover Nicosia during a short but sweet excursion, in which you will learn the most interesting facts about the city, the local lifestyle and the modern transformation of the city. We will meet at the Selimiye Mosque and go on our stroll from there 🙂 Discover what the everyday life of a local looks like and learn where the city gets its characteristic ambience from, by seeing it through the eyes of a local. Walking through the city, you will discover exactly what makes Nicosia special! This is also your chance to get insider tips about the best cafes, restaurants and bars to visit during your time here, and learn how to make the most out of your visit. This is the perfect experience for someone visiting the city for the first time, or someone that wants to rediscover it!

Historical Walking Tour through Nicosia with a Local 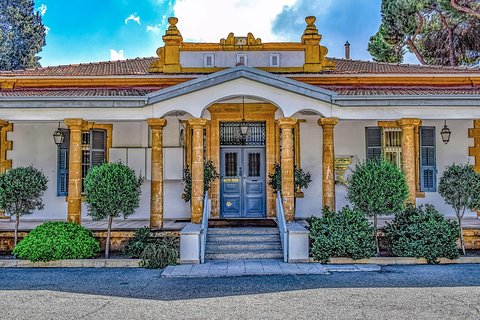 This Experience is provided by a private Local. The group size is up to 8 people. Discover the historical side of Nicosia with a passionate local who wants to share all the historical and fun facts about Nicosia. Our excursion will start at the by the famous Selimiye Mosque. Learn about how the city has grown and changed over time. From visiting churches to discovering the history behind the old fortification or the aqueduct to the traditions in Nicosia, discover unique sites that an ordinary tourist tour won’t show you! We always knew that travelling was the best way of learning, but having a knowledgeable Local by your side to give you insider tips and share local secrets is even better! Of course, if you want to learn about something in particular or have a special interest, just let me know, and I will adjust the itinerary for you!

Private Day Tour in Nicosia and Kyrenia departing from Nicosia 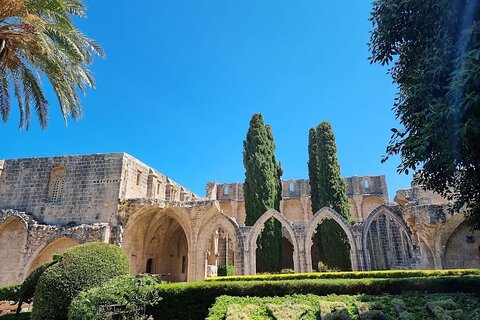 Kyrenia is located in the north of the island. You have to drive thru the 'Kyrenia Mountain Range' to see the most interesting Abbey which is called 'Bellapais Monastery' 'Kyrenia Castle' is located in Kyrenia harbor which will be our second stop of the day where you will see the Shipwreck Museum. In the museum the shipwreck dates back to 300BC. Many items that were found in the ship are also exhebited. After a short walk in the harbor and in the back streets of Kyrenia we drive to the capital of the island which is known as Nicosia. The old city is surrounded with high walls from Lusignan and Venetian time.We'll enter the walled city of from Kyrenia Gate. Venetian Column, St. Sophia Cathedral, Buyuk Han are some of the fascinating sites that we'll see today. You will also have some free time to take photos and do some shopping from the local market. So go ahead and book this tour to visit with two beautiful cities on your limited time in Cyprus.

The village is famous with its lacework. While you walk and take photos in the narrow streets of the stoned houses you will see villagers doing the lacework infront of their houses or shops. You must taste the traditional Cypriot coffee just before you leave the village. It may take about 45 minutes drive to Nicosia. Your guide will tell you all about the culture, the life style and also about the history of the island on the way. When you are in Nicosia you will see the Paphos gate and cross the check point of Ledra Street. You will visit St. Sophia Cathedral, Buyuk Han and the local fruit and vegetable market besides other sites. You will have the opportunity to taste the local food for lunch ( extra) After some free time the tour will end in Larnaca at your hotel.  This tour is ideal if you want to see the local life combined with culture and history.

On the other side of the border, North Nicosia has a distinctly Ottoman feel with its hammams, bazaars, and mosques. You can visit the Selimiye Mosque, which was formerly a ...

Amazing things to do in Cyprus with kids - Smudged Postcard
www.smudgedpostcard.com

A brilliant reminder of the island’s rich history, Lefkosa’s Selimiye Mosque was once a Catholic church. Dating back to the 13th century Lusignan era, the church was converted into a ...

Sharing the same name as its Istanbul equivalent, St. Sophia’s Cathedral is also known as Hagia Sophia and is actually a Mosque. Take your shoes off, head in to pray ...

There are lots of attractive pavement cafes in the Turkish part of Nicosia, where you can relax and take in the atmosphere. My favourites were in a square behind the ...

Top Things To Do In Nicosia: A One-Day Itinerary - The World Was Here First
www.theworldwasherefirst.com

Next, head to the massive Selimiye Mosque, which was formerly the Roman Catholic St Sophia Cathedral. Though it is undeniably a mosque today, it isn’t hard to pick up its ...

The Bedesten, meaning “covered market” dates back to the 6th century. Formerly a small Byzantine church, then a grandly embellished Catholic church and even a covered market during the Ottoman ...

Tips and Recommendations for Traveling to Cyprus
www.tripandtravelblog.com

Nicosia is the capital of Cyprus and among its best places of interest are the Cyprus Museum, the Silimiye Mosque and the Buyuk Han Caravansar where, as in other places ...

Nicosia - Travel Guide & Things to do in the divided city (Cyprus)
www.one-million-places.com

About 100 meters north of the border is the Selimiye Mosque, whichis already visible from afar and was built in the 13th century as the Gothic St. Sophia Cathedral. In ...

51 Fabulous Things to Do in Cyprus, Aphrodite's Island
www.historyfangirl.com

Originally the 13th century St. Sophia Cathedral, like many other Cypriot churches it was turned into a mosque after the Ottoman invasion. It’s two minarets are prominent and visible from the ...

For the visit of the Cypriot capital Nicosia, which is located right in the center of the island, we had planned a whole day. These include the Arif Pasha Aqueduct, ...

St Hilarion, Kyrenia, Bellapais. Cross the border for the first time into the Turkish occupied north of the island. St Hilarion, a 12th-century castle strategically located among the Pentadaktylos (or ...

The best things to do in Nicosia, Cyprus, the last divided capital on Earth
www.matadornetwork.com

Cafe culture is an integral part of Cypriot life and a popular attraction for visitors — not least to ponder the heavy topics that your tour of the border raised. ...

Cyprus Travel Guide: Everything You Need to Know Before You Go
www.myglobalviewpoint.com

There’s plenty to see in the old town. Visit the city’s main mosque, the Selimiye Mosque – housed in a former Catholic Church. From there you can easily walk to ...