Visit our Provence destination hub for day by day itineraries, top things to do in Provence and more!

The Roman Empire was the post-Republican period of ancient Rome. As a polity it included large territorial holdings around the Mediterranean Sea in Europe, Northern Africa, and Western Asia ruled by emperors. From the accession of Caesar Augustus as the first Roman emperor to the military anarchy of the 3rd century, it was a principate with the city of Rome as sole capital. Later, the empire was ruled by multiple emperors who shared rule over the Western Roman Empire and over the Eastern Roman Empire. Wikipedia 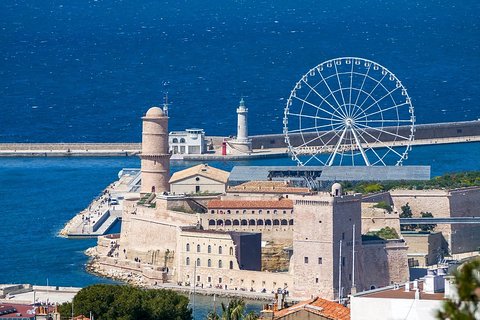 An awesome way for you to explore incredible Marseille with our informative guide is on foot. He will help you to discover all the parts of this historical city, to take a stroll through the history of the city from the Greek times to the Roman, to explore the oldest buildings of Marseille, the medieval ruins, to find out the facts of the French Revolution and to try traditional French dishes, delicacies, and beverages. Your guide will pick you up from your hotel or your cruise ship. You’ll have a walk around the old city exploring all must-sees. During your walk, your guide will take you to a very special place to have a typical french products tasting. After the tour ends you will be taken back to the place of your stay.

Discover Lyon aboard this hop-on hop-off sightseeing bus. Among the 12 stops offered, get off at Fourvière. You will discover a fascinating audio-guided walking tour of the cradle of Lyon and heart of the city over 2000 years ago, with incredible ruins still standing. - Discover the must-sees of Lyon, such as the Fourvière, Vieux Lyon and Confluences. - Take an unforgettable audio-guided tour of the Fourvière hill and its impressive Roman remains - Explore Lyon at your own pace with a hop-on hop-off bus and discover the most beautiful sites of the city.

Ukrainian history buffs will have the time of their lives in Provence. The very name of the region comes from “Provincia Romana” — its original name in Latin. It was ...

Aix-en-Provence is the City of Art and the City of Water. The city began with a Roman settlement in 122 BC named Aquae Sextiae after consul Sextius Calvinus and the ...

There are plenty of busses that go from Florence city center to Fiesole and it is well worth the 35-minute ride. Fiesole is a cute town in the hills where ...

The 10 Best Things to Do in Provence, France
www.tripsavvy.com

Nîmes, which lies on the border between Provence and Languedoc-Roussillon, is a Roman city with some impressive remains. Start at the wonderfully preserved Les Arenes, the first-century Roman arena. Two ...

It’s almost impossible not to love France. But between business trips and personal trips, we hadn’t made it out of the northern part of the country…until now. This 10 day ...

A route I recommend exploring starts at Carpentas travelling along the D4 to Gordes. Near Gordes is Sénanque Abbey. From here take the D4 and then the D900 to the ...

The museum is closed during January, otherwise open year round. Staff at the museum offer a number of different tours of the town, and the various Roman and Medieval sites ...

In the months of summer, you’ll smell the intoxicating lavender aroma of Provence, before stepping foot into the purple-hued haze of natural splendour. The meandering lanes continue past these lavender ...

The remains of these ancient pools can be seen today at the site of a modern, luxurious spa, the Thermes Sextius. The spa and fitness facility is roughly 3,200 square meters ...

Like many places in the South of France, Uzes dates from Roman times. The circular streets that ring the old town were once walls that protected the medieval castle in ...

Walk off some of Lyon’s gastronomic delights with a visit to the top of Fourviere Hill (there is also a funicular) where there is much to see. Traces of human ...

In the beginning the Roman roads were designed for military use. Legions and military equipment could be moved much faster than if they were transferred to cross country. The time ...

We left Nice in the morning of the fifth day of our trip and headed to Avignon, located about a 3-hour drive away. After arriving in Avignon, we explored the ...

Our first afternoon outing via our minibus was to Sarrebourg, probably best known for its Marc Chagall stain-glassed windows housed in the town’s Cordeliers Chapel. After our self-guided audio-tour, we ...

Finally, we’re going to head upwards for the views that I promised. There are steps at the back of the gardens and the route is simply upwards, through the gardens ...