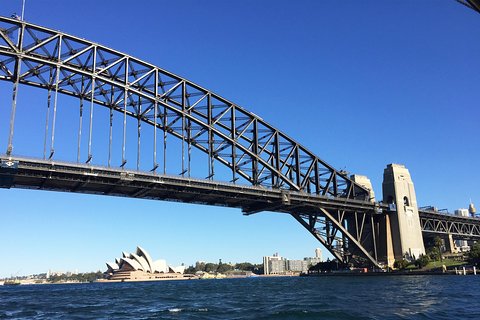 Cruise Sydney Harbour exploring the natural and iconic city sights. Relax and enjoy an Aussie inspired lunch on the water as you mingle with other guests and take in the serenity and views of the harbour. Enjoy a half day tour cruising Sydney Harbour and discover the natural beauty of the harbour as well as the city sights from a unique perspective. With maximum passenger numbers of 14, you will experience an intimate guided tour, with harbour stops in peaceful locations, including Lane Cove River and Taylor's Bay, where lunch and afternoon tea will be served. Enjoy plenty of prime photo opportunities of Sydney's iconic landmarks. The Harbour Sights Lunch Cruise is perfect for all ages, families and visiting guests, to discover the Harbour’s sights and enjoy Sydney’s breathtaking views from the water.

Extending across the north shore, this national park rests on the Lane Cove River. It’s easy to get to for Sydneysiders with access from the North Shore or Macquarie regions. ...

What To Do On Cockatoo Island, Sydney Harbour! - 24 Hours Layover
www.24hourslayover.com

Cockatoo Island is located on the Parramatta River which lies in the heart of Sydney Harbour to the west of the Harbour Bridge. It is the largest island in Sydney ...

The Fairylands Trail is a loop walk on Sydney’s North Shore. It takes about 2.5 hours to master and takes you through a variety of environments including the historic site ...

10 Best Walks In Sydney That Will Take Your Breath Away
www.aworldtotravel.com

I’ve always liked this hike as the Lane Cove National Park makes me feel like I am somewhere other than a busy city. There are many different paths in the ...

30 Best Things to do in Sydney, Australia
www.travellens.co

Who said parks are hard to reach? Located within metropolitan Sydney, Lane Cove National Park is the perfect retreat for families and those in need of stress relief. Picnic spots ...

The Riverside Walking Track is a 5km (one way) walk that weaves along the banks of the Lane Cove River.  The caravan park is around the mid point of the ...

Just 17 km from the city centre, Lane Cove National Park is an easy Sunday day trip. This pocket of bushland is a magical landscape, with a mix of eucalypt forests, casuarina ...

The Fig Tree Bridge was opened in the year 1963 and it is a road bridge that connects Hunters Hill and Linley Point. The bridge carries Burs Bay Road across ...

The running route at Lane Cove National Park could be considered a well-kept secret of Sydney’s running community, but we’re here to reveal it to you. The running track is ...