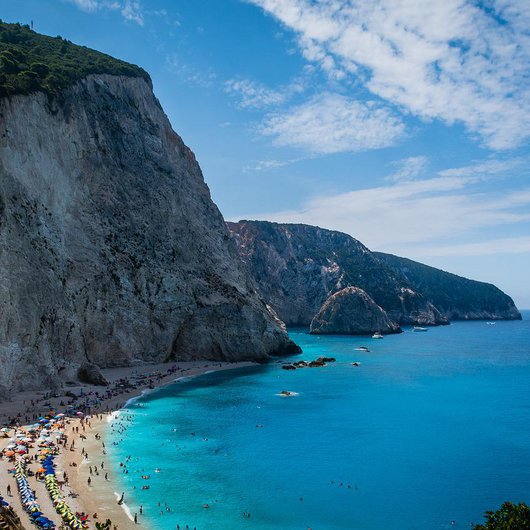 Things to do in Wroclaw It’s fascinating, it’s fun, it’s sure to be surprising. Welcome to a magical place on the Sand Island full of captivating illusions, wonderful atmosphere and helpful staff. Book here your safe and reliable Private Airport Transfer from Copernicus Wrocław Airport (WRO) to your hotel or destination within the Wroclaw city area. Our service operates across 150+ countries and 1500+ airports with an excellent customer satisfaction rating of 9/10 based on 35k+ reviews. - Fixed price with no hidden costs after booking. - Modern cars only. - Certified professional drivers. - Meet&Greet Service: We welcome you at the airport arrivals hall holding a board with your name. - 24/7 Customer Support (English, German, Spanish, French, Dutch and Portuguese). - Your flight is delayed? We wait for you up to 90min with no extra charge!

Book here your safe and reliable Private Airport Transfer from your hotel or location within the Wroclaw city area to Copernicus Wrocław Airport (WRO). Our service operates across 150+ countries and 1500+ airports with an excellent customer satisfaction rating of 9/10 based on 35k+ reviews. - Fixed price with no hidden costs after booking. - Modern cars only. - Certified professional drivers. - 24/7 Customer Support (English, German, Spanish, French, Dutch and Portuguese). 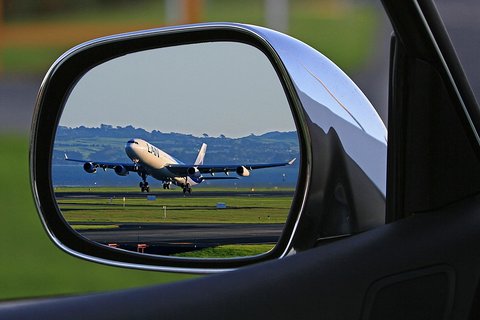 Don't go through all the hassle of waiting in a long taxi or shuttle queues and use our private, door to door airport transfer. A professional driver will meet you in the arrivals hall holding a plate with the name provided during the booking process and will take you directly to your desired destination in the City Center area. Choose from two comfortable vehicles to suit your group size. For groups of up to 3 we offer sedan vehicles that can accommodate 3 pieces of luggage. Alternatively, for larger groups of 4-6 passengers, you have the option of a minivan that accommodates 6 pieces of luggage.

Don't go through all the hassle of waiting in a long taxi or shuttle queues and use our private, door to door airport transfer. A professional driver will meet you in the hotel lobby and take you directly to the terminal you depart from. Choose from two comfortable vehicles to suit your group size. For groups of up to 3 we offer sedan cars that can accommodate 3 pieces of luggage. Alternatively, for larger groups of 4 - 6 passengers you have the option of a minivan that accommodates 6 pieces of luggage. Enjoy a nightlife experience where local guides take you on a journey through the best bars and clubs the city has to offer. Join our party tour, explore the most vibrant spots while meeting people from all over the world. The only thing you have to take care of is to have a good time. Your local guides will provide you with 3 beers or shots for free in the first bar, organize drinking games, then get you free shots in each of the places you go to finishing like a rockstar with a free VIP club entry to the last club. 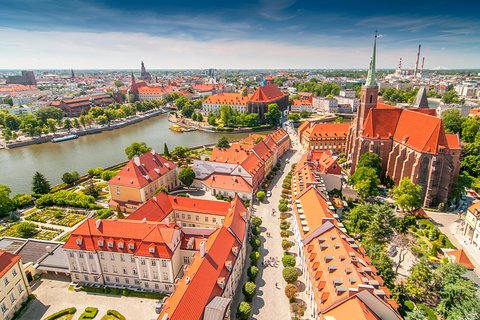 This walking tour allows you to get to know the city at its fullest. You can walk in relaxed and easy way with your friednly and knowlagble local guide in English, who is going to tell you the most important, interesting and intriguing stories about the city of Wroclaw 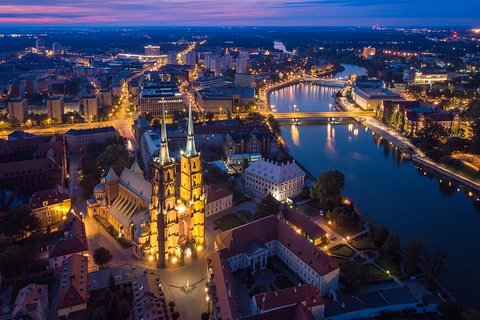 Discover the oldest part of the city where the history of Wroclaw started over 1100 years ago. In a small group, limited to 10 people, you will see and learn more about the pearls of the Gothic and Baroque architecture: the Cathedral of John the Baptist, Church of the Holy Cross and other ancient churches of Wroclaw. Your passionate, local guide will reveal to you interesting facts and legends of the famous islands of Wroclaw. • Visit the Cathedral Island – a very special and authentic place illuminated with the gas lanterns • Visit the Sand Island with the monumental Church of Our Lady on the Sand. • Listen to insightful information about Wroclaw history and legends of the islands; including the adventures of Casanova’s visit to Wroclaw, legend of the Dumpling Gate and many others. • For those who would like to see more – there is also the possibility to visit the inside of the Cathedral • 2 h walking tour with an expert, local guide • Small groups limited to a maximum of 10 people.

Wroclaw District Of The Four Temples

The District of the Four Temples - also known as the District of Mutual Respect, is the most easy-going, colorful and charming district on the map of Wroclaw. During this tour your expert local guide will take you to the area of Wroclaw city center where within an area of only 400 m, four beautiful religious temples exist; a Catholic church, an Orthodox church, a Protestant church and a Jewish Synagogue, each of them with its own fascinating story. This is also a great opportunity to learn more about the history of the Jewish community in Wroclaw. You will discover how the relationships between followers of the different religions in the city has changed over the centuries. Your guide will share with you many interesting facts & legends and take you to a unique and stunning Neon Courtyard. 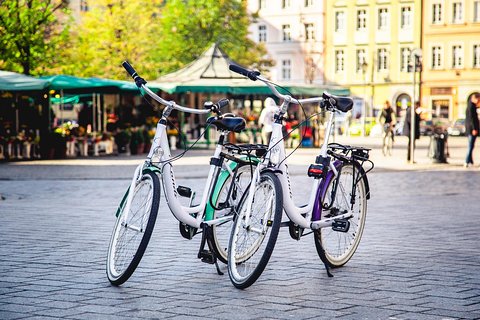 We repared 40 bikes for our customers. Our bikes are combining city chick with safety and comfort. We can customize them due to our preferences. Bikes can be rented in our rental place in Tourist Information Center at Rynek 14 (Main Square 14). 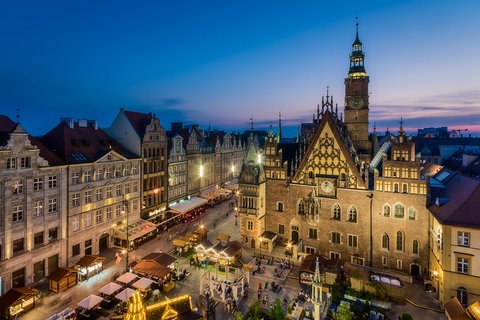 Explore the heart of Wroclaw with your professional, licensed guide. You will discover many top attractions of Wroclaw in 2 h, including the history and legends of the city. Whilst walking around the Main Market Square you will see picturesque tenement buildings including the townhouses of Hansel and Gretel, Golden and Blue Sun, Seven Electors and the Old Gallows House. You will visit the Salty Square where you can meet a dragon. Your excursion will continue to the medieval slaughter houses called Jatki and finish in jail! but only to try a taste of local beer and food! - Licensed, informative, friendly guide – even history can be interesting and fun! - Discover the most popular places to see in the heart of Wroclaw - See the places where centuries ago the criminals and wrong doers where punished - Listen to some scary stories of Wroclaw (the Witches Bridge, buried rebels and many others) - Learn about the history of Wroclaw’s old trading place - Small groups limited to 12 people. 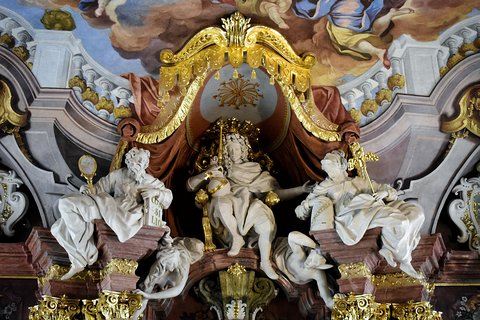 During the 1 hour tour you will dwell into the rich history of Wroclaw reflected in one of its most prominent and spectacular buildings. You will learn about the Austrian legacy, the counter reformation, and admire the grand Baroque ceremonial hall named after the school's founder, Aula Leopoldina. Strolling through other interiors such as the Oratorium Marianum and the Imperial staircase, full of sculptures and intricate ceiling frescoes, you will understand what kind of powerful ideological movement the counter-reformation was. Moving on you will also hear about the Prussian-German University, with its long standing traditions of student fraternities, scientists, Nobel prize winners, and world famous musicians, such as Johannes Brahms, who gave concerts in its interiors. As a conclusion you will get a spectacular view over the city from the Mathematical Tower learning about the destruction of the WW II, border changes, and rebirth of the school as a Polish University of Wroclaw. Over the last 2 years, we have developed a truly fun and unique way to explore/learn about Wroclaw's beautiful old town and it is great for absolutely everyone. Tourists, families, business groups, stag/hen parties... whether you want to see the sights and get the history of the city, entertain the kids a little, beat your friends in serious competition or just try something completely different, this is definitely the activity for you! 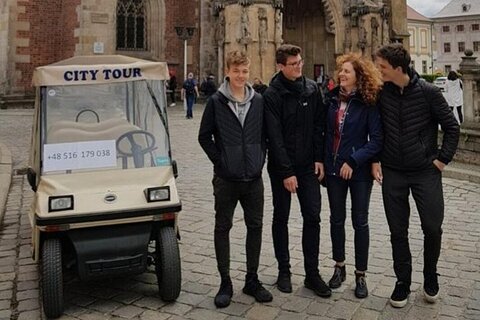 We see the city with the comfortable, environmentally friendly electric car. You will have a professional guide who was also born in Wroclaw and knows the history of Wroclaw. You have the opportunity to experience the atmosphere and climate of Wroclaw in 2 hours. You have just arrived to Wroclaw and you wondering how you can get to the city center? With us, you don't have to look for taxi or public transportation. Book our private airport transfer and arrive in style. We are cheaper and more comfortable than regular taxi service. Our private driver will pick you up directly from the airport and drive you directly to your accommodation. What is more, WE TRACK YOUR FLIGHT, so you don't have to be worry about any delays. Our driver will always be waiting for you! 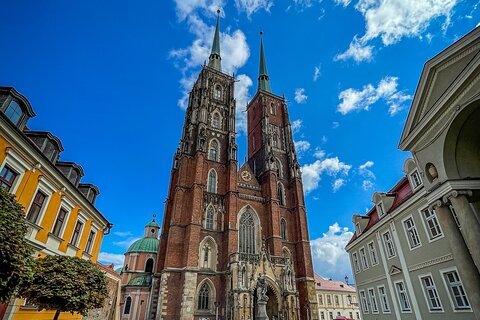 Wrocław is a unique city. On this tour you will learn not only how to pronounce its Polish name and see the city's most important architectural marvels, but also discover the scope of the complex history of Central Europe, especially the roots of the Polish-German turmoil, which are important part of our preparation. Plus, we show you modern life in Poland, talk about the living standard, art, food and welcome any questions you might have. Explore the oldest part of the city of Wroclaw discovering the most ancient monuments and unveiling the thrilling stories about saints and dukes, loyalty and treachery, prosperity and plunder in the unique Medieval sceneries of our “Little Vatican”. You will see the relics of their splendid castle and learn about the miracles that occurred during the Mongol invasion. Walking through medieval cellars you will time travel into an era of knights, peasants, and clergy. During the visit of the Cathedral you will experience, besides the ambience of the tall Gothic naves and brick arches, the magnificent Baroque chapels designed by Italian-mastered disciples of the famous Bernini and the Austrian genius from Vienna: Fischer von Erlach. 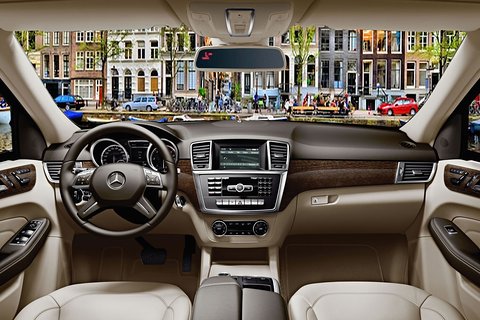 Take the worry out of your departure to Wroclaw Airport and pre-book a private transfer to suit your group size (up to 6 people). Avoid the long lines for taxis at the hotel, and travel in the comfort of a Premium car or minivan.

Take the worry out of your arrival to Wroclaw (WRO) Airport and pre-book a private transfer to suit your group size (up to 6 people). Avoid the long lines for taxis on arrival, and travel in the comfort of a Premium car or minivan. 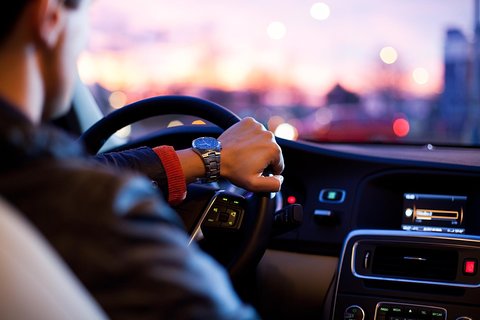 Don't go through all the hassle of waiting in a long taxi or shuttle queues and use our private, door to door, luxury airport transfer. A professional driver will meet you in the hotel lobby and take you directly to the terminal you depart from. Choose from two comfortable vehicles to suit your group size. For groups of up to 3 we offer luxury sedan cars that can accommodate 3 pieces of luggage. Alternatively, for larger groups of 4 - 6 passengers you have the option of a luxury minivan that accommodates 6 pieces of luggage.