There are few places in this nation that are more iconic and recognized than parks like Yellowstone or the Grand Canyon. But there is one park that sticks out among the rest because of its unique rock formations that provide picturesque views of the American Southwest in ways that Yellowstone and the Grand Canyon can’t replicate. And it’s all due to it’s arches. It is not a coincidence that Arches National Park is one of the most visited parks in the United States. We visited it during our epic summer trip visiting 19 national parks in a single road trip. In this post, we will share the top things to do in Arches National Park to help you plan your own visit.

So lets get started, shall we?

Top Things to do in Arches National Park

Home to over 2,000 delicate sandstone arches, Arches National Park is a beautiful pristine park located in east-central Utah. Its arches formed as a result of thousand of years of ever changing heat, cold, ice, wind and underground movements. The park contains almost 120 square miles of high-desert located on the Colorado Plateau. It was made a national monument on April 12, 1929, and a National Park in November of 1971. It’s a rather popular park in the southwest and receives more than 1 million visitors annually on average.

Arches is also one of the most convenient national parks we have visited. The main road runs all the way through and offers plenty of opportunities for turnouts and photo ops. The convenience, though, is coupled with crowds, so don’t expect an easy unobstructed shot.

It also gets very hot in the park in the summer. Visit early in the morning or late afternoon to avoid the heat. Sunrise and sunset time will also offer an amazing perspective of the Arches lit up in golden hour.

Part of the appeal to this particular park is the absolute ​variety ​you get in visiting the many different formations because no two are alike. So what should you plan on seeing while you’re visiting?

Elephant Butte is a 5,653 foot tall summit located in the park and as such is the highest point inside the park itself. Adventure film fans will recognize it as the backdrop for the opening scene in ​Indiana Jones and the Last Crusade. It lies above an underground salt bed, which helps in the formation of arches, spires, rocks, and sandstone fins that have eroded with the wind and occasional storms. One of the best places to see the rocky rise in all it’s grandeur is from Panorama Point, which is a location in the park that is also used for outdoor stargazing at night. But more on that later.

Don’t let the name fool you; Devils Garden is actually a beautiful area to spend an afternoon, a sunset, or even a week! There are arches, spires, and a huge concentration of sandstone fins, which are narrow rock walls that form when rainwater erodes through parallel fractures caused by the salt deposits below.

The piece- de-resistance of Devil’s Garden ​has ​ to be Landscape Arch which is the longest arch in North America, spanning over 300 feet.

Other activities in Devil’s Garden include camping, backpacking, hiking, and stargazing. It’s home to a pristine campground that is available for bookings up to six months in advance and is a perfect base camp to make a long visit as comfortable and enjoyable as possible! Camping is available March through October when the park is not so hot, and occasionally in the winter months as well.

The trails in Devil’s Garden range in difficulty from beginner trails to more difficult trails like the Double Arch Trail which is a 4 1/2 mile round-trip hike. There is also a primitive trail that runs about two miles from Double Arch and is considered the most difficult segment of the Devil’s Garden Trail system. It includes steep slopes, narrow drop offs, and rock scrambling, but the views are breathtaking if you’re willing to take up the challenge.

Not far from the Visitor Center lies soaring towers and beautiful trails that lead to Park Avenue Viewpoint and the LaSalle Mountain viewpoint. Park Avenue is a beautiful series of tall, flat monoliths that resemble skyscrapers and give you the feeling that you’re walking through a city street rather than a desolate desert. The Courthouse Towers are tall sandstone columns that are located along Arches Scenic Drive 4 miles from the Visitor Center.

Balanced Rock is one of the unique areas in the park standing over 120 feet tall. It looks like a giant boulder sitting atop a pinnacle like a golf ball on top of a tee. As it turns out, it’s actually all ​one ​stone that was formed the exact same way as a lot of the arches in the park. The boulder looking strata sitting on top is estimated to weigh over three-and-a-half ​THOUSAND ​tons!

Arguably one of the most picturesque areas of the park, the Window Section is a dense concentration of arches, towers, and spires that look out over Elephant Butte and the far off, often snow capped Rocky Mountains in the distance. It also contains Double Arch which is a lovely walk through two arches that are conjoined.

Delicate Arch is probably the most photographed feature of Arches National Park. You can do a 3 hour hike to get really close to it. At sunrise, you will see dozens of photographers looking to get that perfect shot. Alternatively, view it from the Upper Viewpoint, which is a much shorter hike. Save the energy for another day! Either way, it is one of the iconic, must do things to do in Arches National Park.

As of 2018, the Park service broke ground on an outdoor night sky view in a space located at panorama point. It is one of the best things to do in Arches National Park. There is seating for seventy-five people as well as telescope pads for those inclined to bring their own equipment.

Arches National Park has also partnered with Canyonlands National Park and Deadhorse Point State Park to offer stargazing expeditions throughout the year. Rangers provide intuitive programs about constellations as well as many other astronomy related events from time to time. Check the NPS website for more info on and schedule for these.

To some people a rock is just a rock. But to many, the beautiful archways and natural columns are a reminder of the ever-changing nature of the American landscape. The picturesque desert views offer us insight into some of nature’s most fascinating processes. Not to mention the opportunity to snap beautiful candid pictures to share with friends and family.

Although it can get extremely hot in the summertime, (often averaging over 100°) it is a beautiful park to visit in the fall and winter time. But remember that you will need lots of water because it is still a desert! Also bring a cushion because some of the views are so staggering you want to sit down for a while. Trust us on this one. 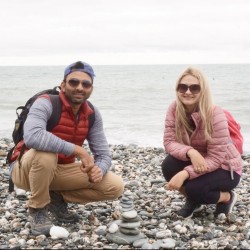